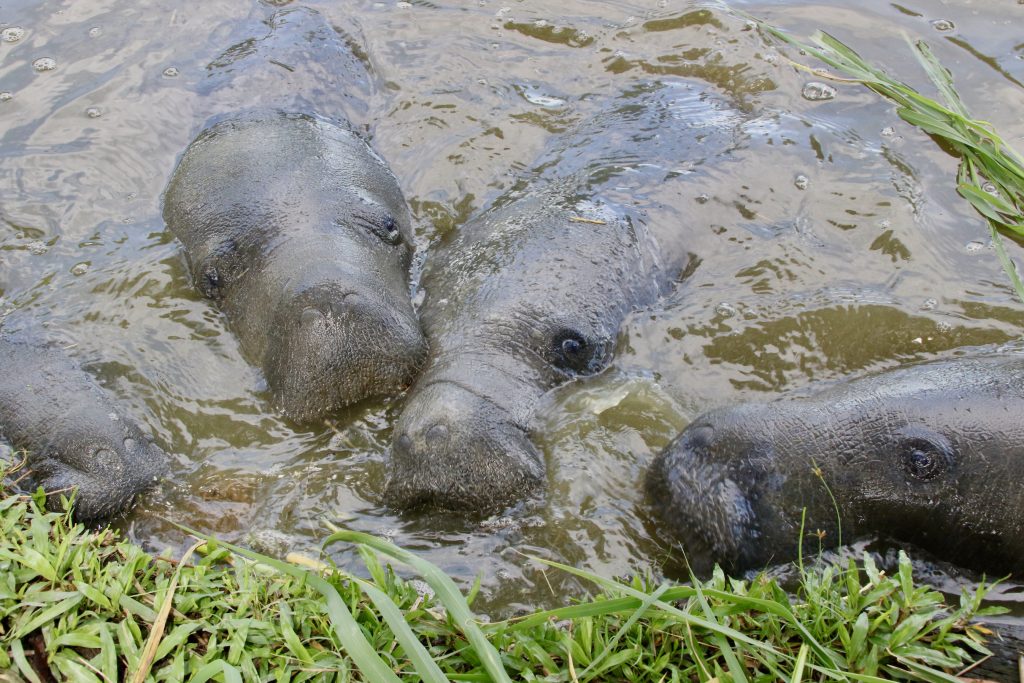 It’s about a ten-hour flight to Trinidad & Tobago, or T&T or Trini as the locals call it. There’s a short stop in St. Lucia and it’s always fun to see the impressive pitons that loom over Castries – the emblem for their national flag. Then on for a short decompression stop overnight at the Kapok Hotel in Port of Spain before heading to the Guyanas. Guyana means “Land of many waters” in old Amerindian, and when flying in close to the Venezuelan border it’s a classic Jurassic Park landscape covered in misty rainforest and enormous rivers – the Essequibo and the Demerara, original home of cane sugar production, and the historic focus for the capital Georgetown. Non-stop land disputes here have led to fights over oil and gold, and the former British colony is now independent. We land at Cheddi Jagan airport, named after the Indo-Guyanese and US-educated dentist who formed the country’s first modern political party in 1950. The drive towards the Atlantic into Georgetown takes a lengthy two hours as we track the river which looks as though it could overflow any second. There is significant poverty along the way before we eventually check in to the charming Cara Lodge – two old colonial houses built in the 1840s and now joined together. 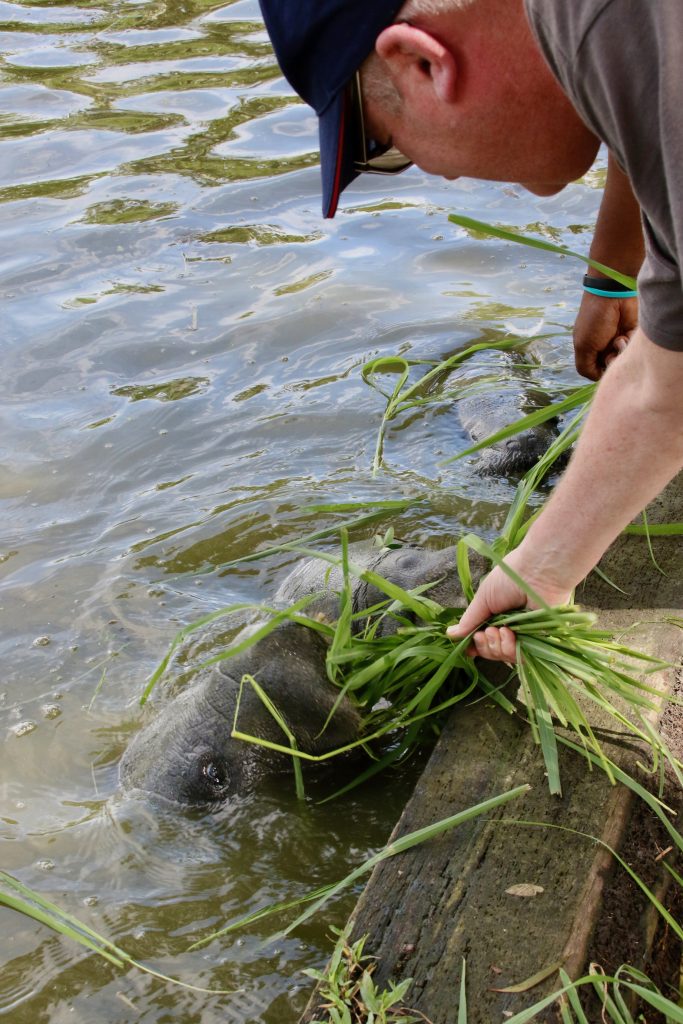 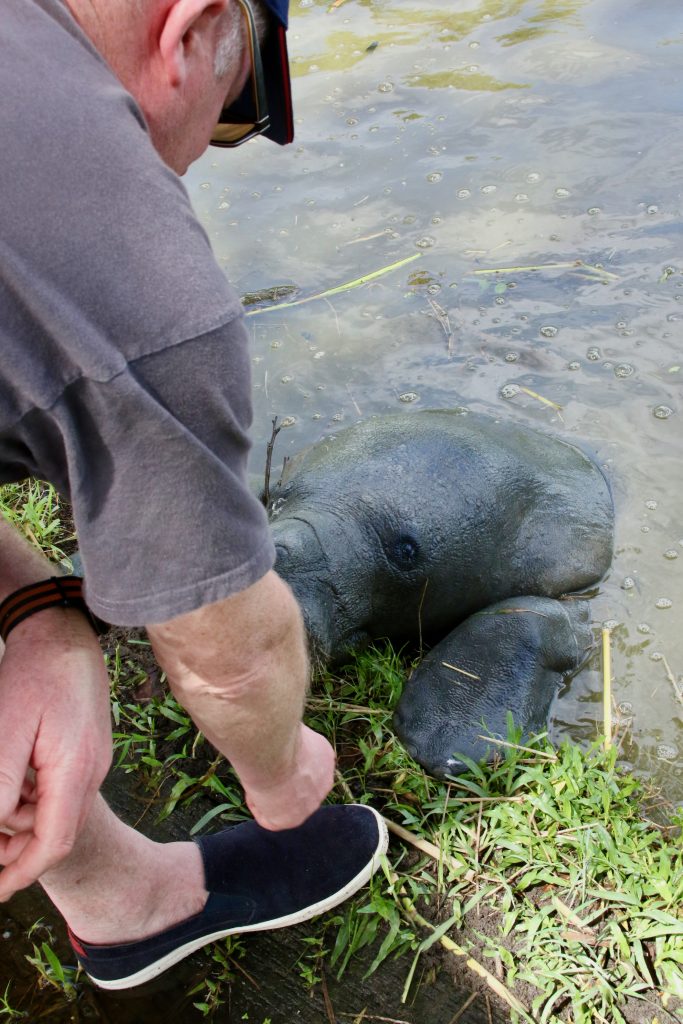 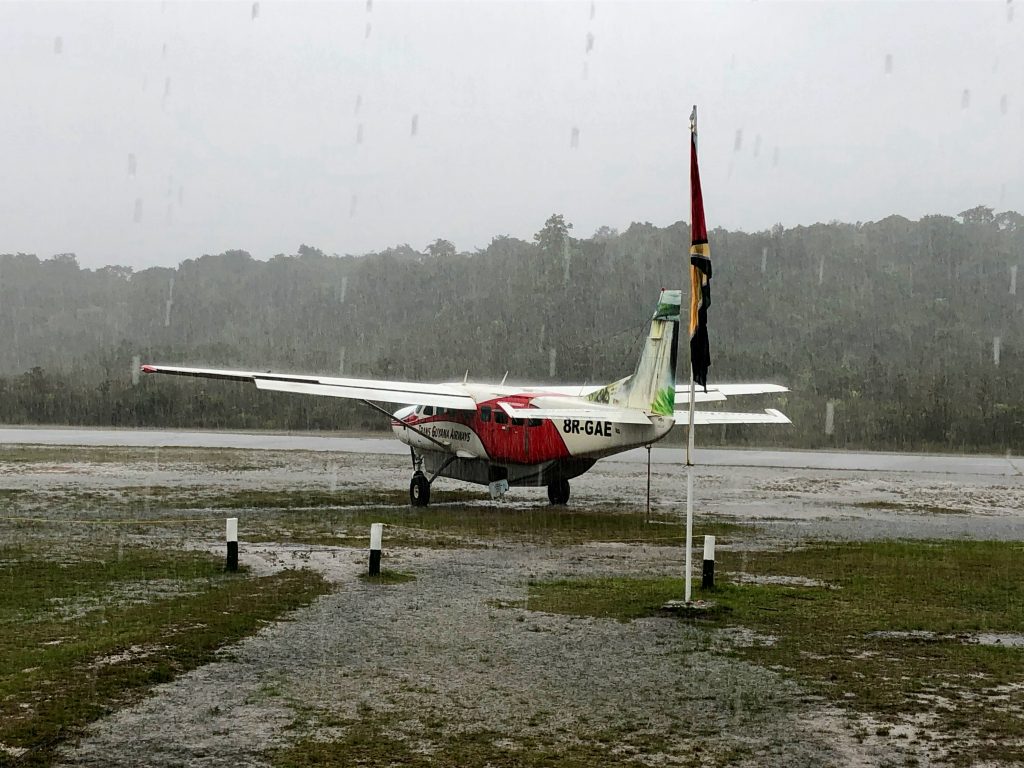 The next day we take a short 15-minute drive to the old airport in Ogle – the Eugene F. Correira International Airport – to take a Trans Guyana Airways flight (“Where the experience is the difference”) to the famous Kaieteur Falls. On the way we see some preparations for their next big festival – Mashramani, which in Amerindian means “celebration of a job well done.” Quite why they are preparing now when it starts in February is something of a mystery. The Kaieteur Falls have the usual history and legend surrounding these amazing places. Teur means ‘falls’ in the local dialect and according to Patamona Indian legend, Kai was a chief who paddled over the falls to his death to appease Makonaima, the Great Spirit, to save his people from the Caribs. They are so remote that they were not discovered until 1870 by the British explorer Barrington Browne. They are five times the height of Niagara, and at 226 metres claim to be the longest single drop in the world. That’s 140,000 gallons per second cascading down from Canary Wharf Tower. We view it from three different points which have no guard rails – unheard of in almost any other part of the world. One viewpoint has been roped off having become a notorious suicide spot. Giant Tank Bromeliads are huge cactus-like plants that house the tiny 2-inch golden frog that spends its whole life in a single plant. Just as we have seen everything in brilliant sunshine, the heavens open and it tips down. We eventually take the one-hour flight back through a heavy lightning storm which knocks our small plane (strangely named the “Grand Caravan”) around a bit until we can have a clear run back to Georgetown as the sun sets. A dramatic day. 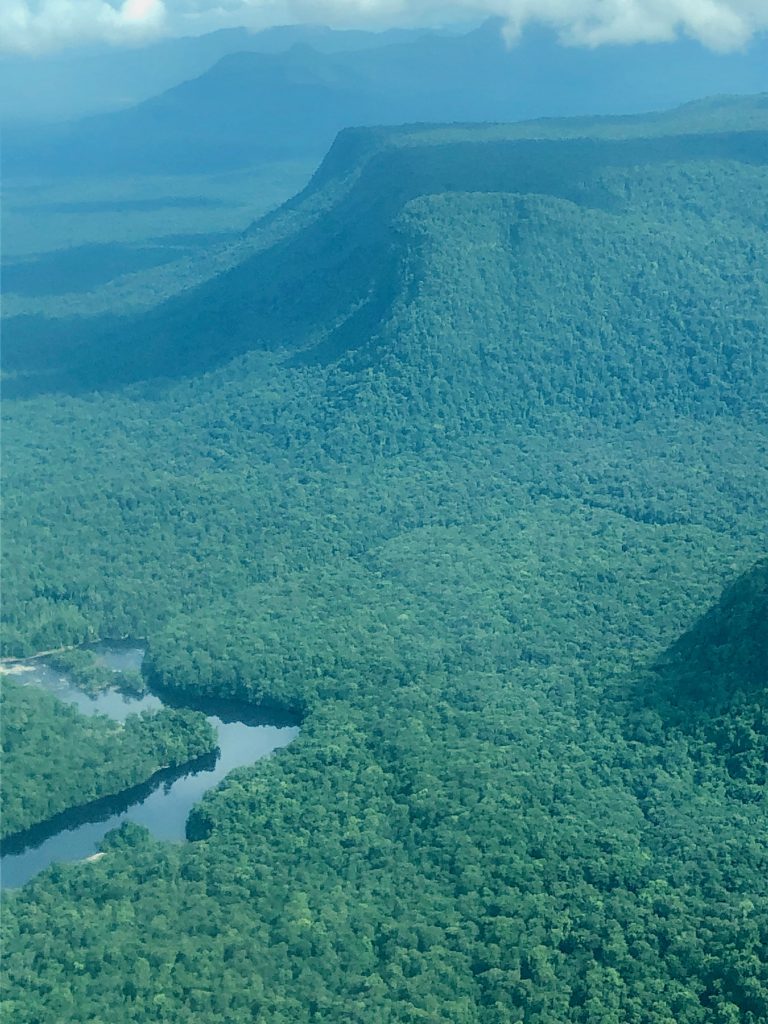 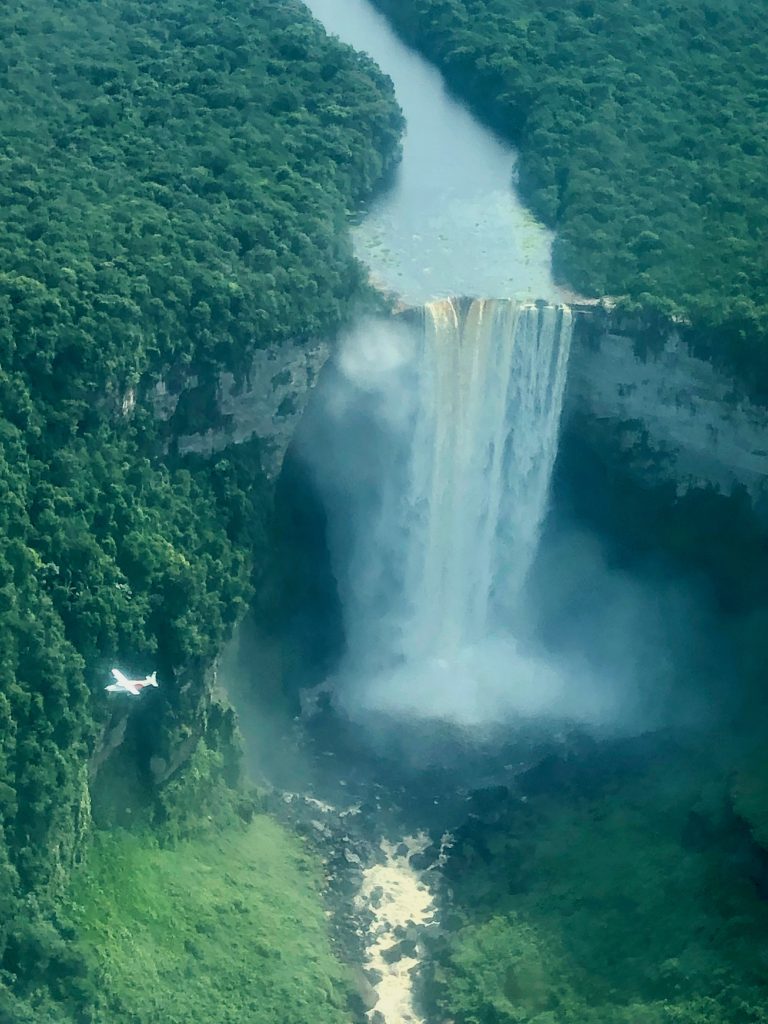 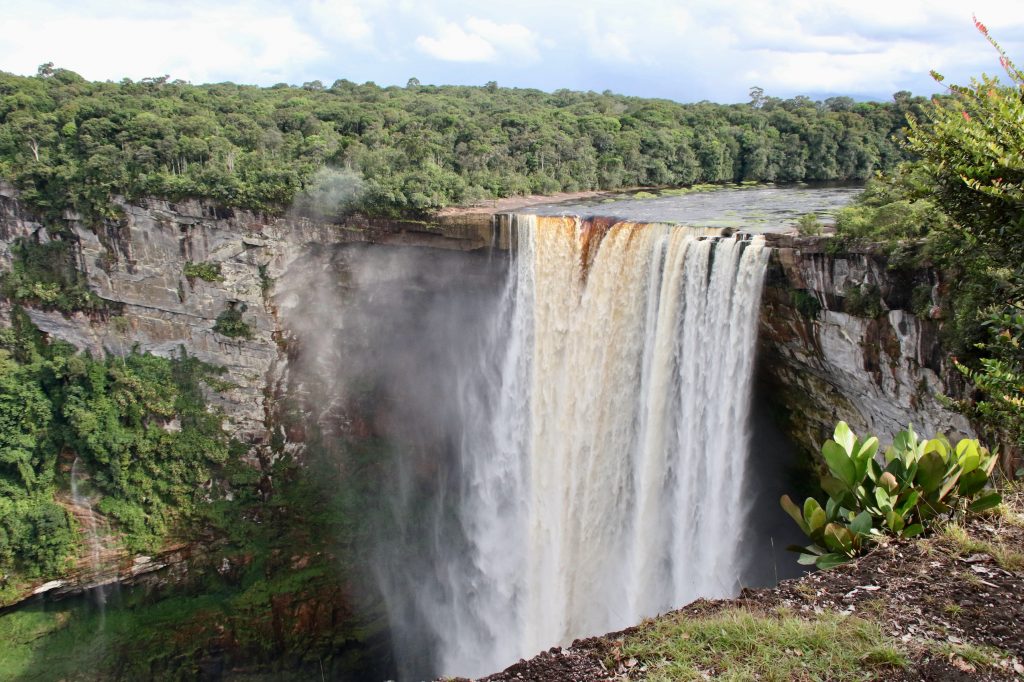 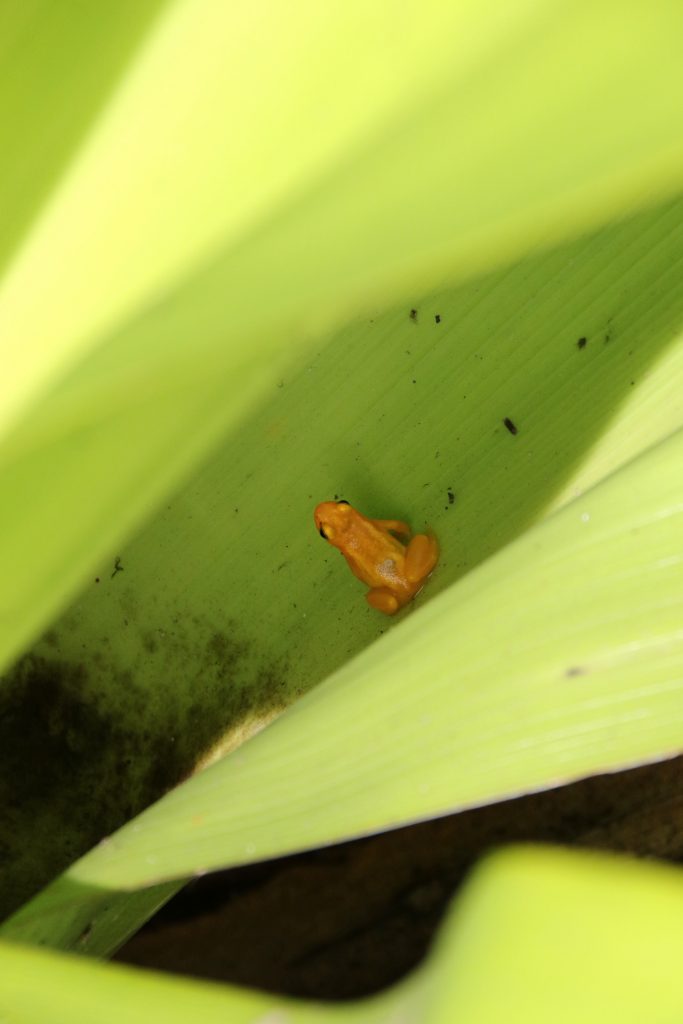 The next day is Monday and it’s time for a city tour of Georgetown. Stabroek Market is gridlocked and a mess – avoid, particularly as it is regarded as somewhat unsafe. St. George’s Cathedral is lovely both inside and out – purporting to be one of the world’s largest freestanding churches, which makes little sense because it is supported by iron pillars. The National Museum is an ancient delight stuffed with ageing examples of taxidermy, including some improbably large fish and a version of the extinct giant sloth which is as big as an elephant. The quaint Walter Roth Museum of Anthropology includes some charming artefacts from local Amerindian culture. You can take photos, but, strangely, only if a person is in it. The botanical gardens are pleasant enough but pretty much empty of birds until dusk, but the highlight is feeding manatees in the National Park. Take a large clump of grass, wiggle it in the water, and over they come for a munch. Lovely. And who would have known that they have five ‘fingers’ in their flippers, and that they would put both out of the water to beg like a dog? 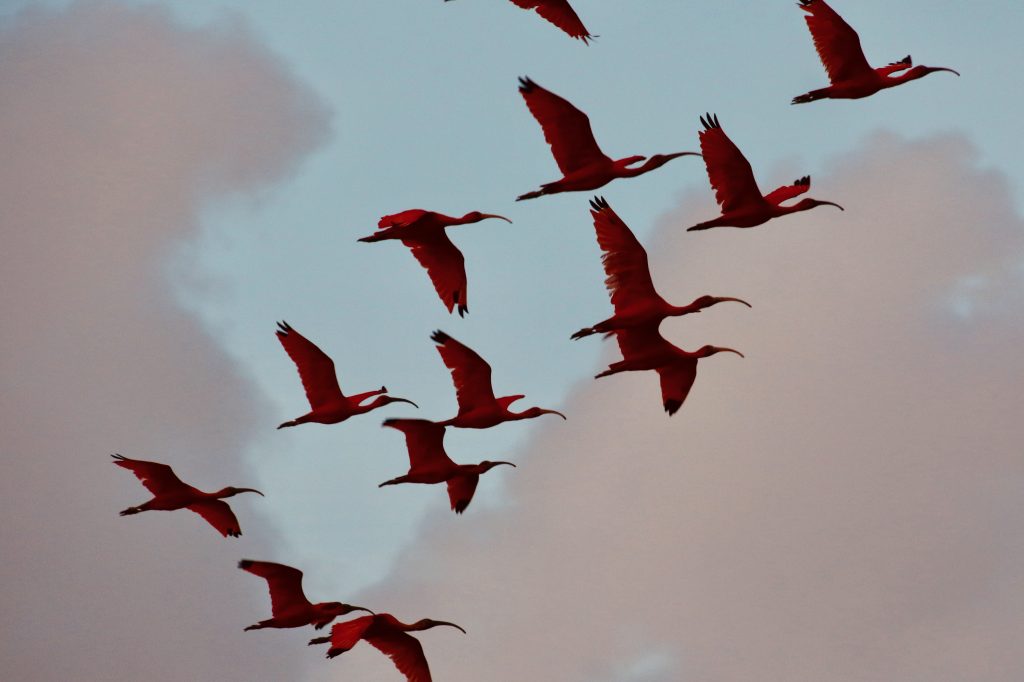 In the afternoon we take a cruise in a boat on the Demerara River – the original site of huge sugar plantations. This is now a pseudo dock behind Stabroek Market, which is the sort of place where you would probably lose your wallet or camera in an instant. The Demerara also gives its name to the local wooden shutters which slant above a window box into which rich colonials would put ice blocks to provide a cooling system. The Demerara Harbour Bridge claims to be the longest floating bridge or pontoon in the world at 1851 metres long. It’s all made of iron, and the traffic makes a nasty metallic racket as it thunders over it constantly. This has moved all the birds that roosted in the area downstream, where we sit and watch as hundreds of egrets, snail kites and scarlet ibis fly in for the night. An excellent sight, if somewhat diminished by its proximity to a large quantity of industrial shipping, much of it provided by Exxon Mobil who are now drilling for oil and gas. Along with the high number of gold and bauxite miners in town, this is conflict eco-tourism on the front line. 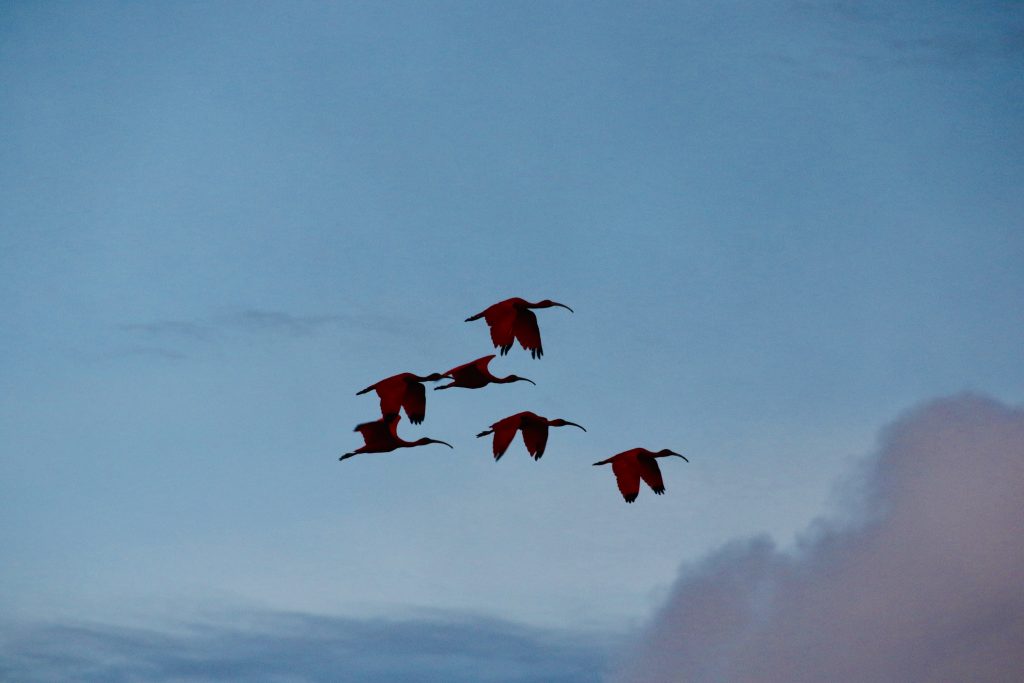 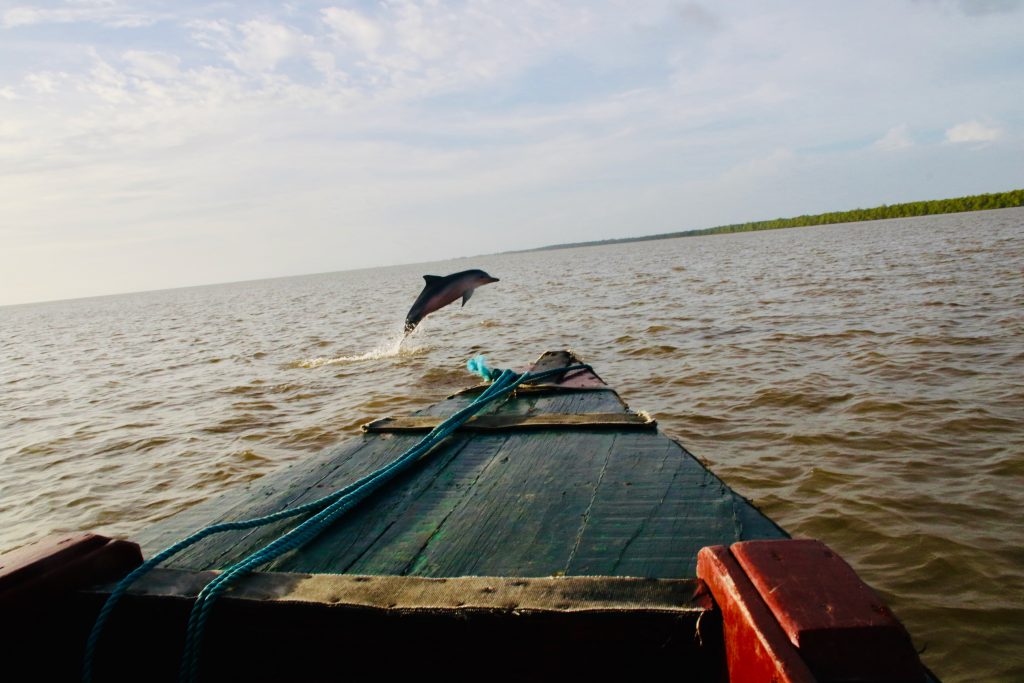 The next day we are flying to Suriname. In a one-hour flight in a 12-seater, we fly over the mouth of the Corentyne River to Paramaribo, pronounced Para as in chute and maribo as in the sweet Haribo. We land at a tiny airstrip that is barely visible from 3,000 feet, even though I am sitting behind the pilot. It’s called Zorg-en-Hoop and it was set up by a couple of guys in 1952. This is a former Dutch colony which mixes a superb blend of Javanese, Amerindians, Chinese, Hindustanis and, of course, Dutch. They all seem to rub along fine until the elections, when the fact that the political parties are all based on race brings the subject to the fore. A small city tour is pleasant enough, fronting onto another big river, the originally named Suriname, which sports a large high bridge. There is a mosque next door to a synagogue which provides a pointed symbol of religious tolerance, and the old Dutch buildings that earned the city UNESCO heritage status. It’s pleasant but mainly because of the cultural mix. They are clearly trying to upgrade or maintain the quality of certain public buildings, but more work could be done as modernity invades in the form of the next KFC Drive-Thru. The Torarica Hotel is nicely positioned just by the river and has all the facilities you might want. In the afternoon, we drive to the pier at Leonsburg where we board a a small boat to go dolphin watching. Where the Suriname meets the Commewijne River, the river dolphins gather to feed. We see about 20 of them over a really relaxed hour or so, with no-one else around. Several times they leap out of the water for our enjoyment. We pull up and take an informative stroll around a community sited on a former plantation, surrounded as ever by drainage channels with sluice gates. There is a high standard of living here and clearly a lot of pride in running a decent living space for all. 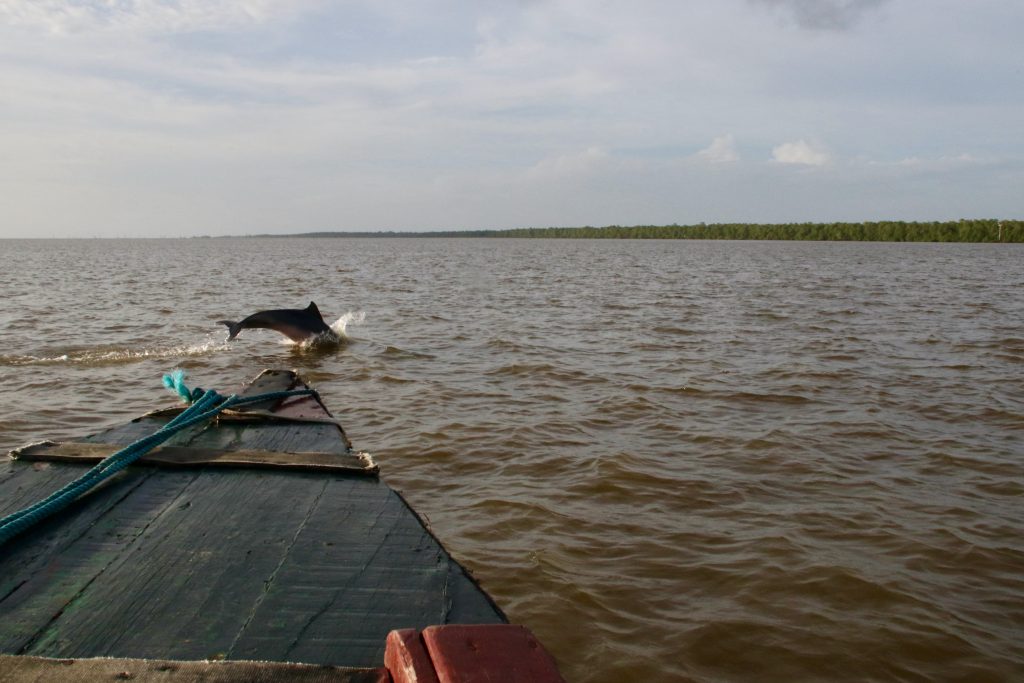 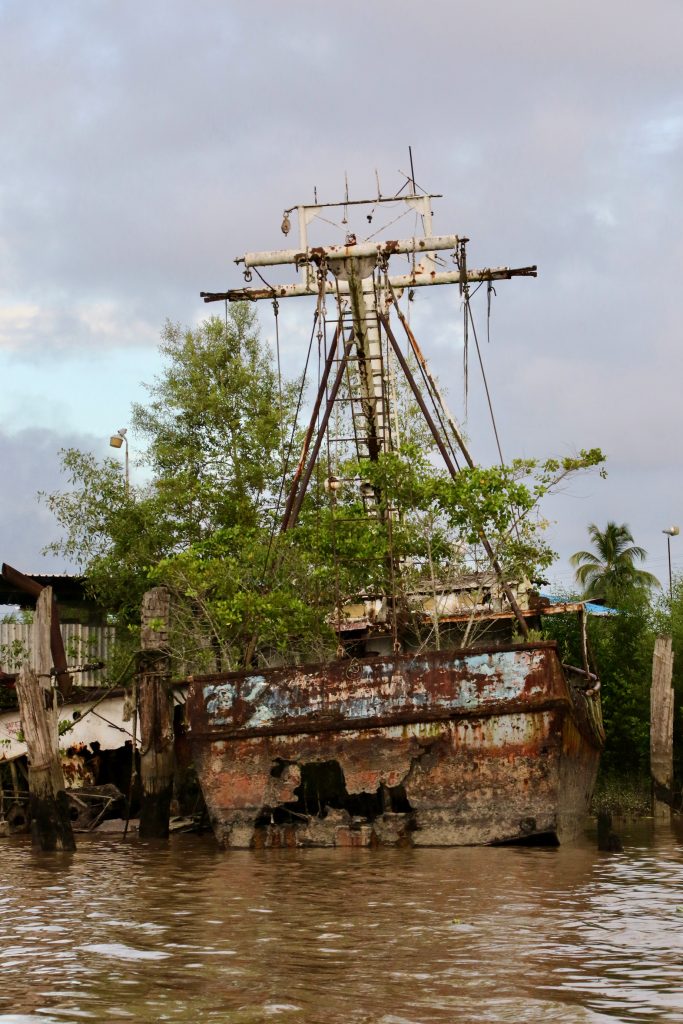 The next day we drive along the coast road to the Albina border station, where an old guy in a pirogue transports us over the Maroni River into French Guiana, also confusingly known as Guyane. This is actually a department of France and, contrary to what some guide information suggests, it does not constitute an improvement in roads or other standards that we can see. We have lunch at La Goelette (French for schooner) and it is indeed a boat on the river stationed on bricks. Lunch is good with local fish and curry. Afterwards we visit the harrowing Camp de la Transformation in St. Laurent du Maroni. When slavery was abolished around 1850, the French ran out of labour for their plantations, so they decided to ship 70,000 of their convicts out here to carry on their work. In a brutal prison set up, we are shown depraved conditions, being chained up by your ankles all night, and even guillotines to execute miscreants. Shocking stuff. We drive on to Kourou which is the base for our boat trip tomorrow. The Hotel Atlantis is nothing like an idyllic lost city. It’s actually more like student accommodation and has no restaurant in the evening. On the way we are delayed an hour by a roadblock protest. We never see the protestors, but we do see police and military storming into the jungle followed by what sounds like gun fire or grenades. In the end we conclude it is tear gas, and when things die down we are allowed through. 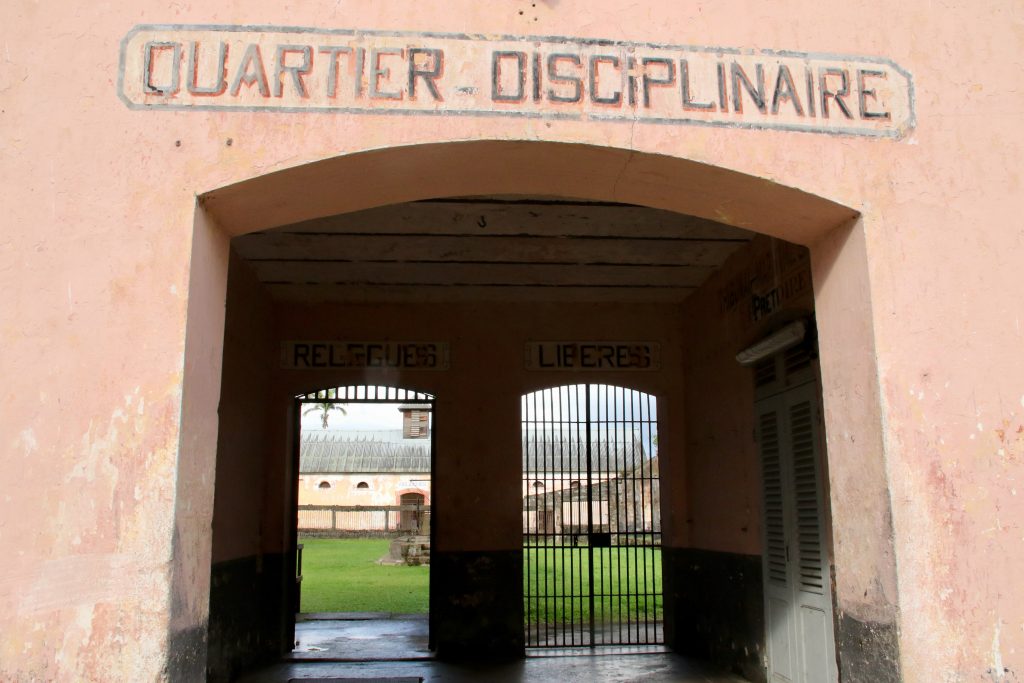 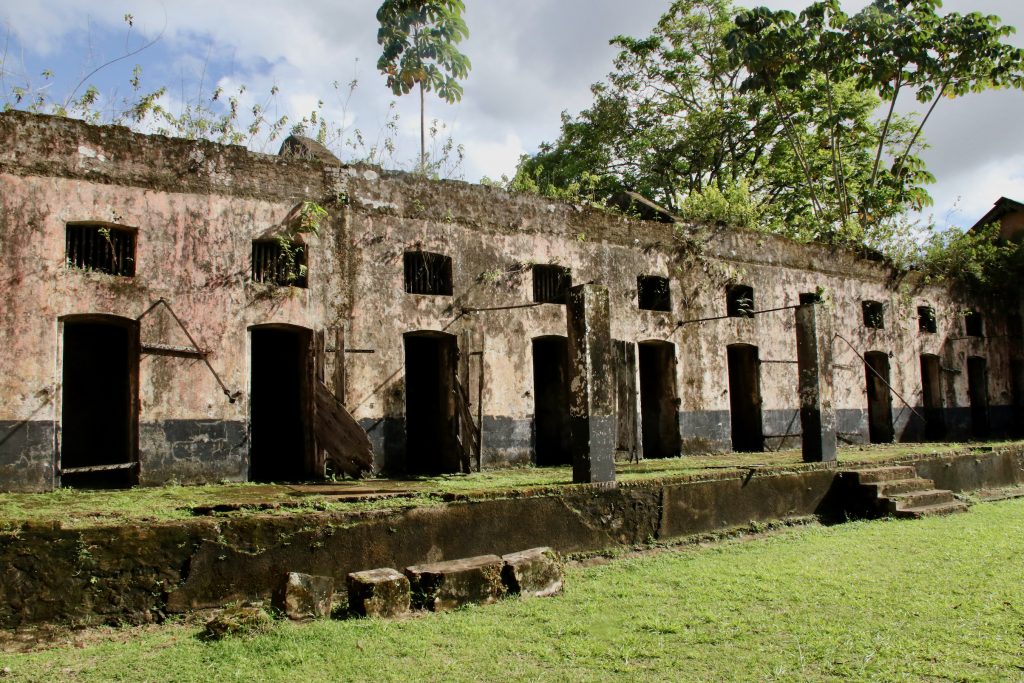 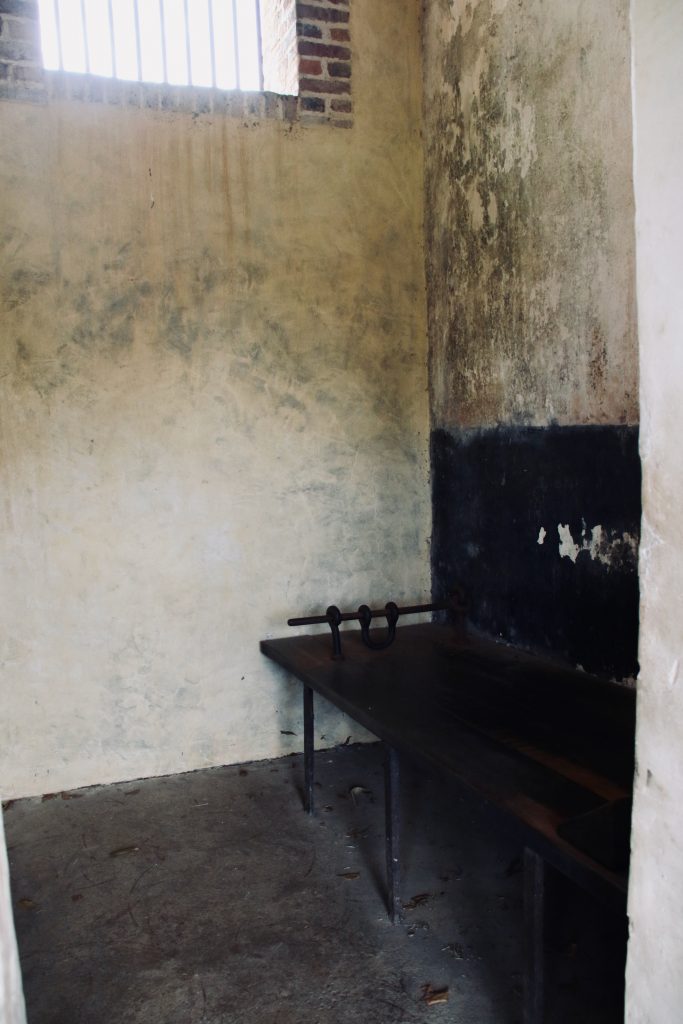 Our boat trip is on a catamaran, and we head for the Iles de Salut, the so-called Salvation Islands, where the conditions were more bearable than the mainland. Bearable that is for free people, but not for the convicts who were sent out here. While the guards, governors and their families lived well, the inmates were subject to hideous indignities. One block of accommodation had no rooves, just a grill open to the elements. This was the scene of the Papillon book written by the escapee Henri Charriere. Worst of all is the third island. Devil’s Island was for solitary confinement and was guarded in total silence. After a rough crossing out, we have a lovely smooth and sunny trip back, mulling over the atrocious history we have just witnessed. 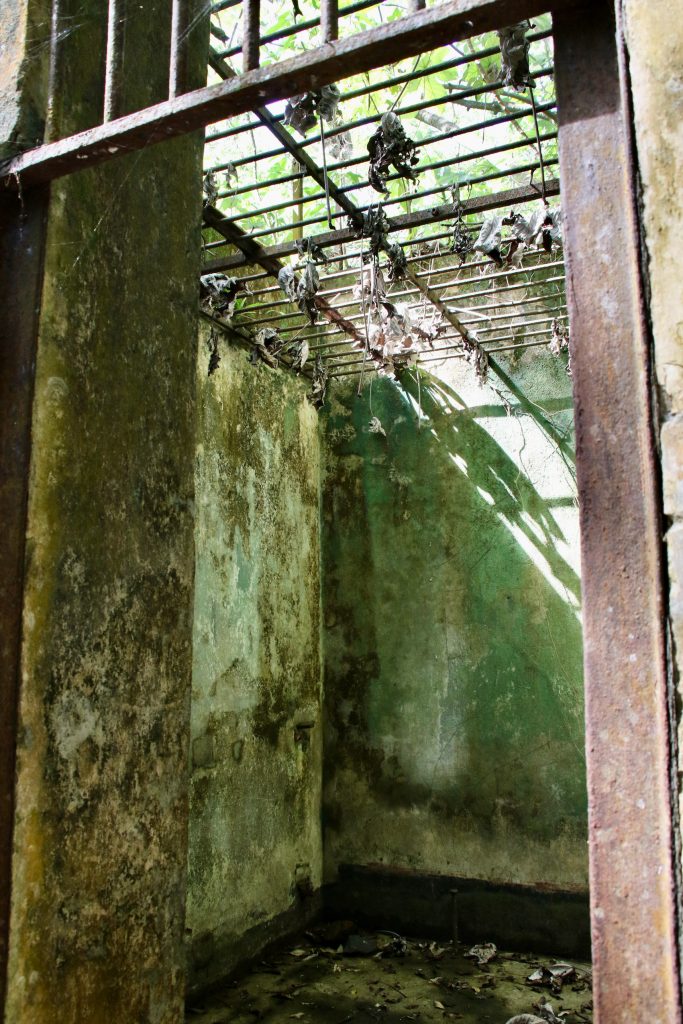 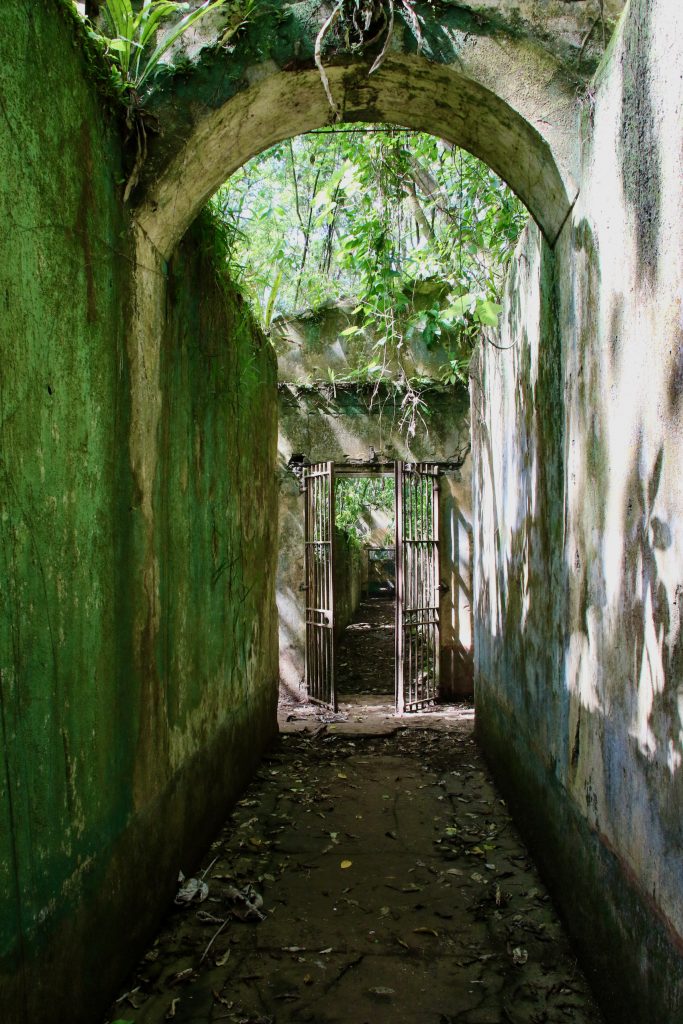 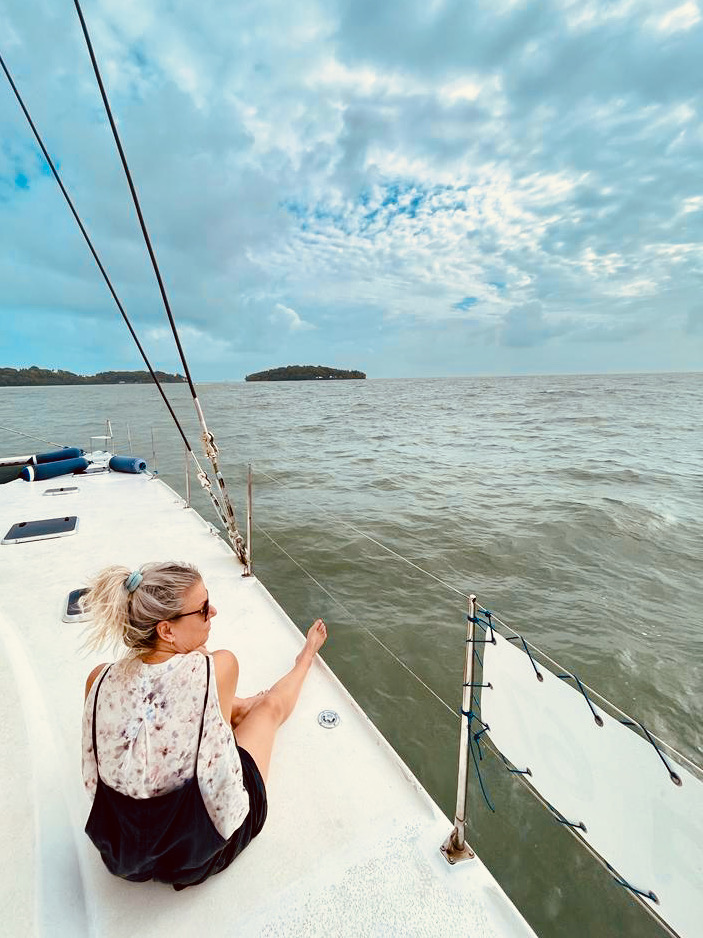 The next day it is raining hard again but we manage a short walk around Cayenne which is not really worth it. It’s another example of French neglect. The Central Hotel is supposed to be the best in town but it is really poor, and despite being the capital, the city has very little to offer. Classic colonial buildings have in the main been left to decay, the fort is a brick hut covered in graffiti, and cheap frontier shops have invaded. To be avoided if possible. We then embark on the long trip across the 3 Gs, as they call them. 3 hours from Cayenne back to the Maroni River, cross the border into Suriname and another 3 hours to Paramaribo where it is Friday and the end of the month. The bridge is slow and the traffic somewhat jammed. We pitstop back at the Torarica Hotel and rise early to catch a 7.30am flight back to Georgetown, where it is pissing down. A party of birders sit disconsolately sipping coffee after their flight to the interior has been cancelled. It’s good to be back at Cara Lodge where we have secured an excellent early check in. Time to reunite with one of the bags of luggage we seem to have scattered all over the Caribbean and sort out our laundry in readiness for Trinidad & Tobago.

Final remarks on the 3 Gs. You need an open and inquisitive mind to travel here – small planes, variable hotels, some examples of underdeveloped infrastructure. Our mission was mainly cultural, having seen a lot of rainforest before in Costa Rica, Brazil, Venezuela, Guatemala, Belize, Sao Tome and so on. Careful research is need before coming. French Guiana receives a fairly poor 5 out of 10. The French could do so much more to support this department. Guyana receives a creditable 7 –  a good attitude and excellent natural environment with a mild markdown for industrial development slightly out of control. At the top, Suriname with 8. It is an excellent blend of over 5 cultures, which generates an interesting and tolerant atmosphere. This is a challenging and thought-provoking project for anyone who has already seen large chunks of the rest of South America.