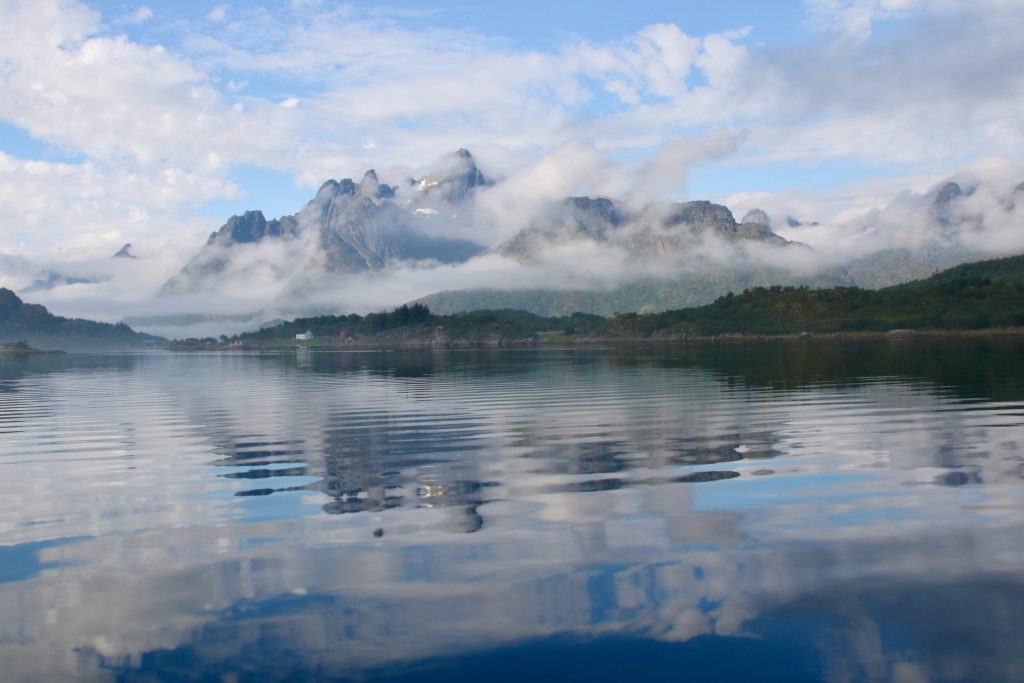 For once getting out of London is fast and easy from terminal 2 at Heathrow. Initial impressions at Oslo’s Gardermoen airport were quiet until we turned the corner into immigration for something of a shock – a heavy scrum of hundreds queuing to get through. It made little difference being non-EU as all the electric barriers were out of order. It took an hour and a half to get through, leaving us with just a few minutes to reach our connecting flight. For an additional insult, we had all our duty-free booze confiscated on the grounds that it had not been sealed in a see-through bag with the receipt inside – incompetence from World Duty Free at LHR. We then flew 1.5 hours north into the Arctic Circle to land at Narstad Narvik Evenes airport. Having three names must have confused the baggage handlers because Sarah’s bag did not turn up. We then paid £20 for a three-minute cab ride to the Sure Best Western hotel where we are given probably the world’s smallest room. It would have to do. We ate some chilli con carne and retired to the roof terrace to watch the sun refuse to go down – up here it doesn’t really set at all. 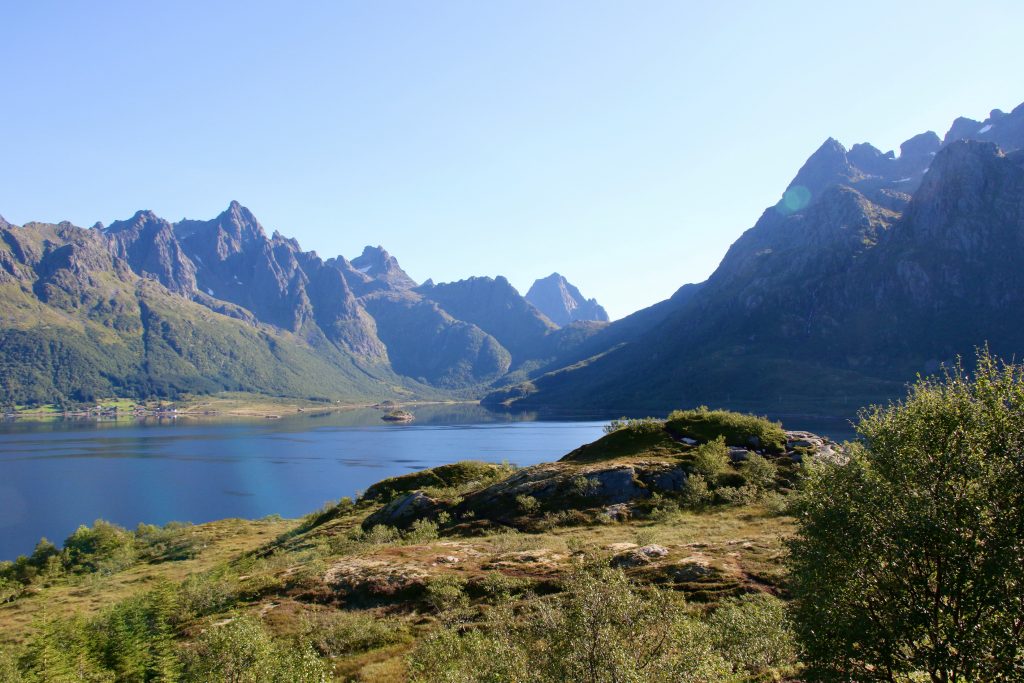 In the morning back at the airport none of the check-in machines are working causing more chaos. My long-held view of Scandinavian efficiency is rapidly declining. The SAS lady comments on the chaos at Oslo and says they lose bags every day. Ours is now in Bodo somewhere to the north. After a one-hour wait we collect our hire car and begin a very pleasant drive to Sortland, where we check in to the Scandic Hotel. The town is unremarkable but the fjord is scenic enough. We are now in Vesteralen, where you can watch the cruise liners come and go whilst fishermen haul in salmon caught standing in the car park by the shopping centre. We have a decent meal and bottle of Sancerre in the Mat + Vin Hus. On reflection we are not sure why we are here. It’s a 4-hour round trip to Andenes where we were due to go whale watching but having experienced the intensity of driving conditions on winding, windswept roads, we opt out and go for a 2-hour local hike instead. This is a very pleasant affair around several lakes. The sun is out and we are guided round by some friendly sheep who seem to know the Evatnet area very well. 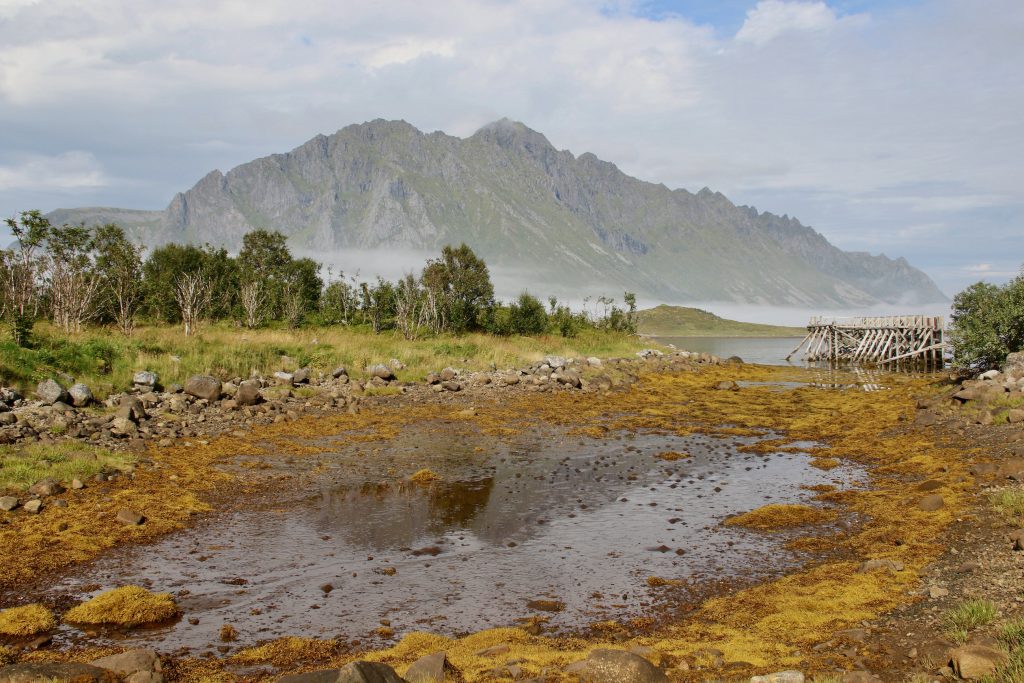 It is then time to leave Vesteralen and travel to the Lofoten islands proper. We are 170km into the Arctic Circle, but it doesn’t stop anything happening. There are excellent roads and infrastructure, huge tunnels and bridges linking hundreds of islands together, and 1.5 hours later we are cruising into Svolvaer, population 4720. The scenery of the Moysalen National Park on the way is superb, but we didn’t see any reindeer or moose. Checking into the Scandic hotel it appears that there’s a triathlon going on, and we see the unusual spectacle of swimmers coming into the harbour and then jumping onto bikes, to the backdrop of a guy shouting through a PA system. We have a good lunch at Nordis on the waterfront. 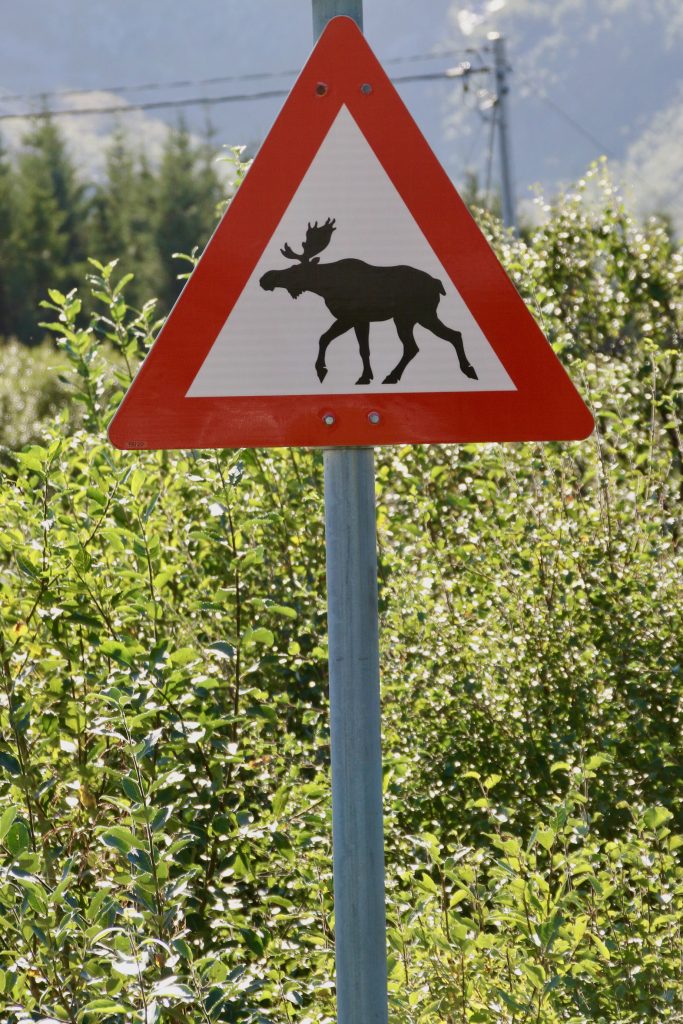 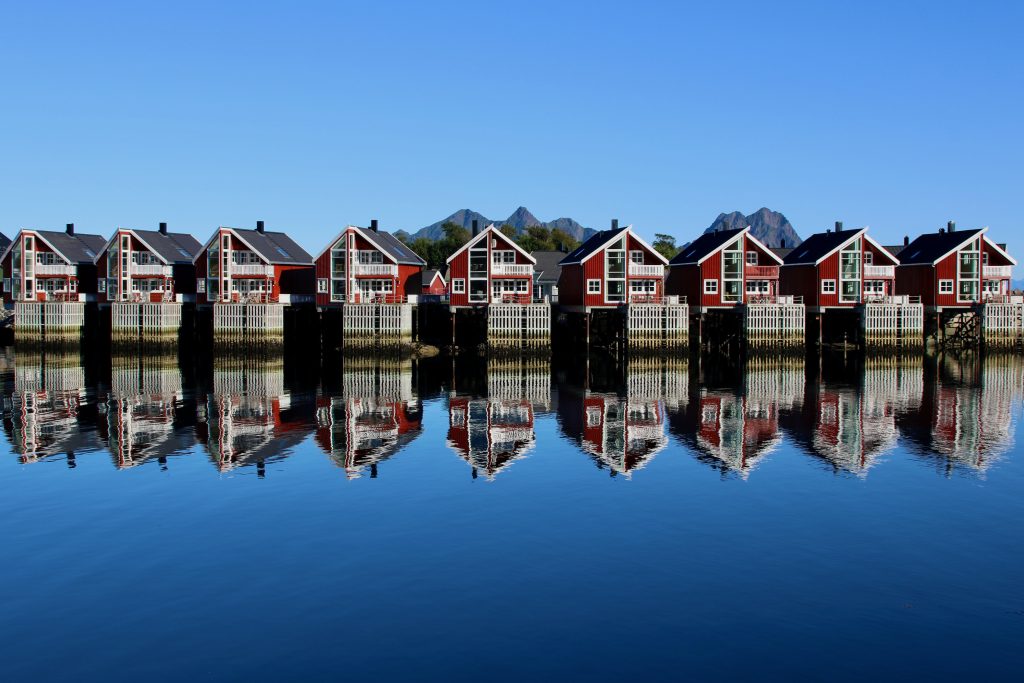 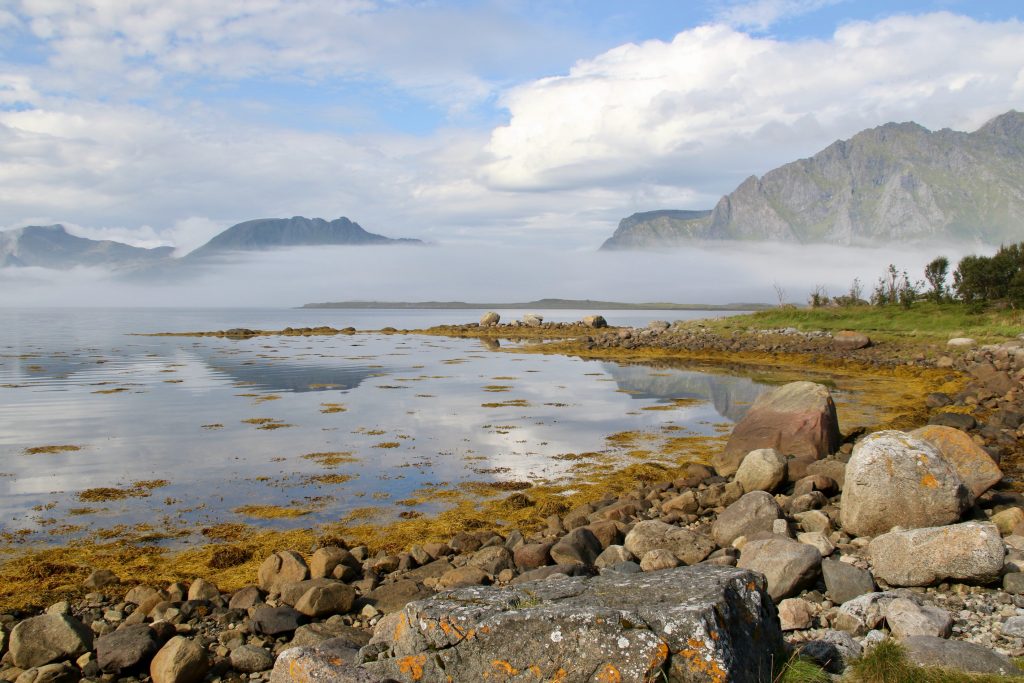 The next two days are dedicated to maritime activities. The first is a cruise to Trollfjord, a short, tight fjord with high cliffs and a decent population of white-tailed eagles. The second is more action based. We put all the waterproof high-viz gear on and head out at speed on a rib. This is great fun, and our main purpose is to get up close and personal with the eagles, which we succeed in doing. Our guide hurls herring into the water and hundreds of them come steaming down to pick up the fish. Great stuff. 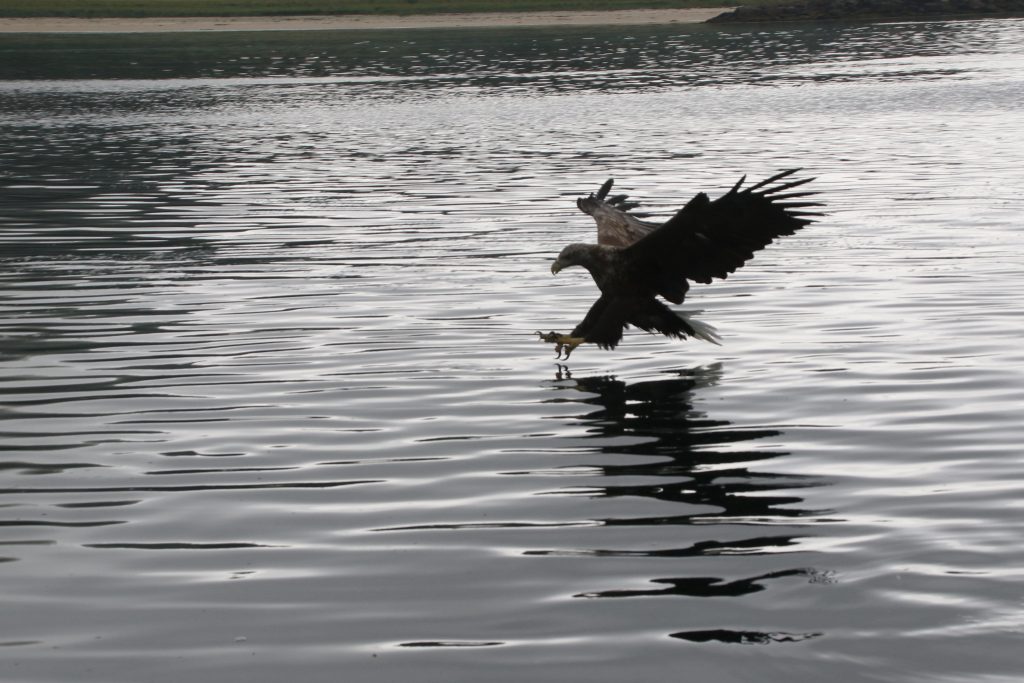 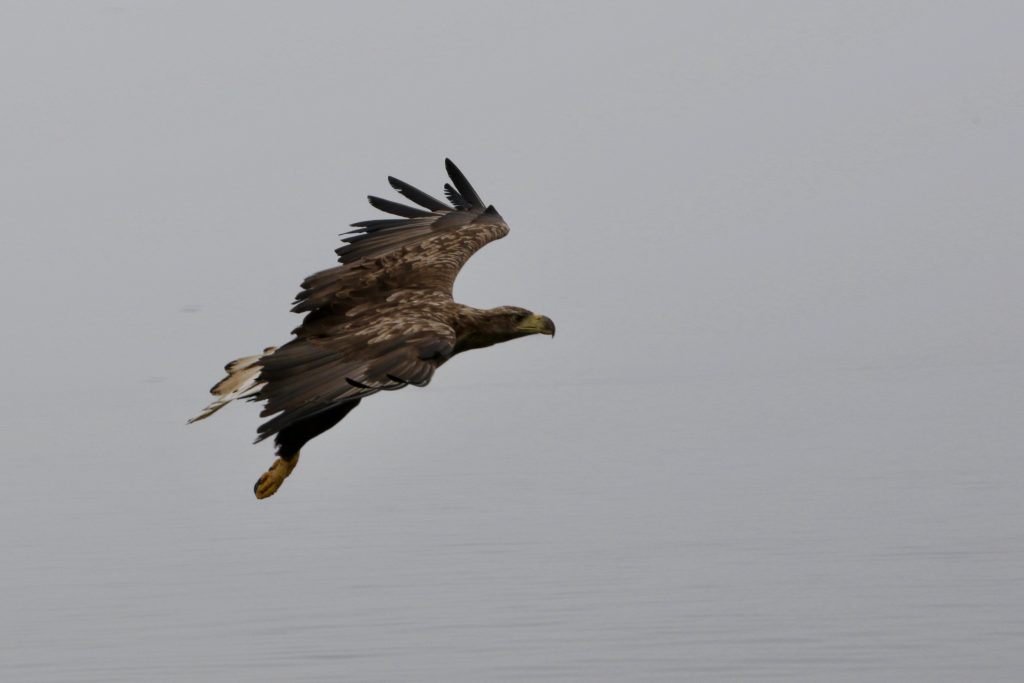 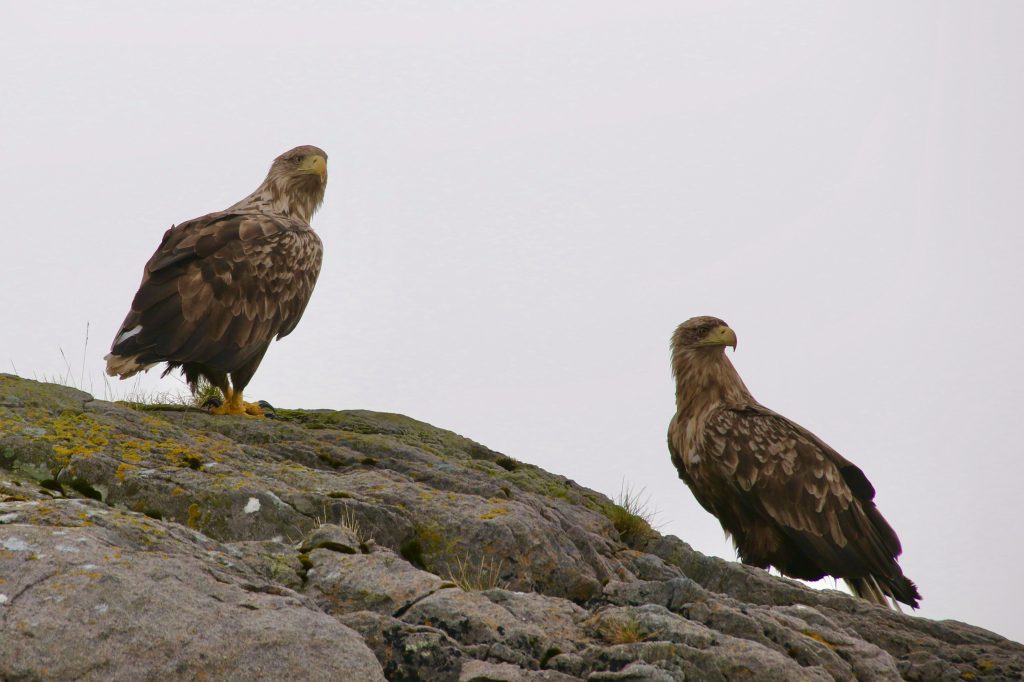 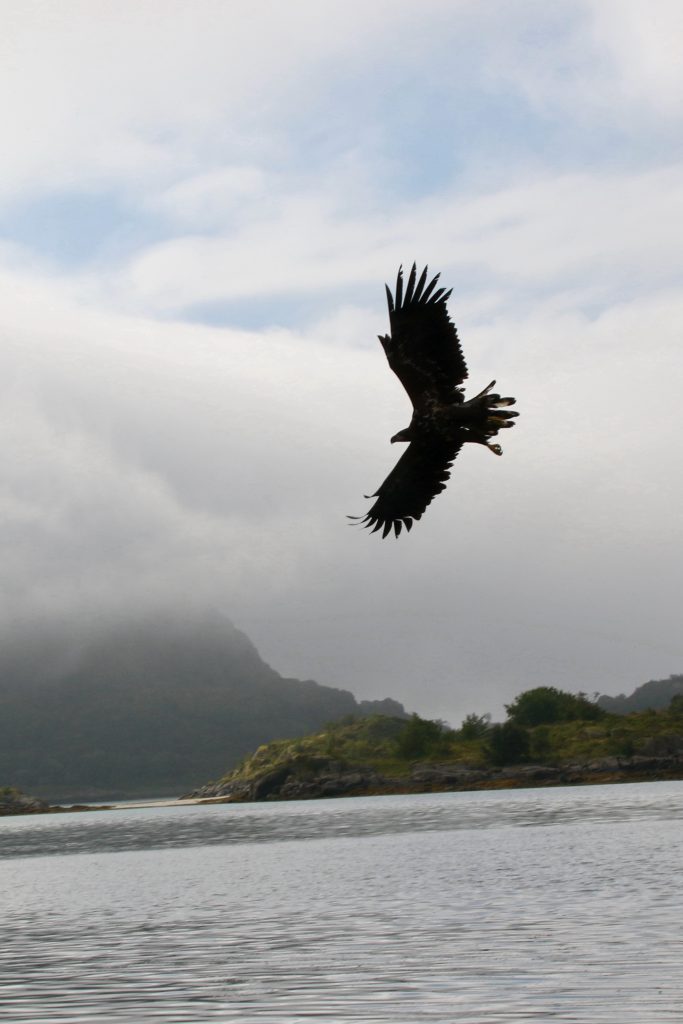 Then we are off again, this time right down to the bottom of the islands to Reine (pronounced like nine) where we spend three nights at the Reine Rorbuer (the local word for cabin). The sun is out and it’s a Sunday so the place is heaving with outdoorsy types. We have a few beers in the shadow of the double mountains here at the end of the world. In the night there is an almighty thunderstorm and a powercut and in the morning all the tourists have gone. Whatever the weather, it is starkly beautiful here. 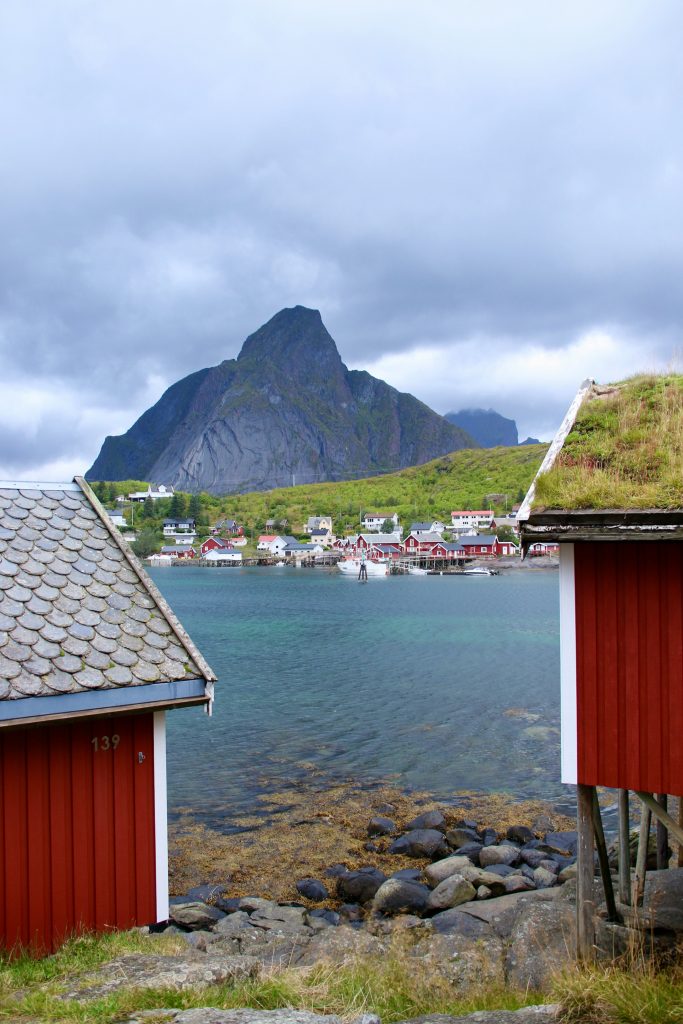 For the next three nights we use the rorbuer as a base for reading and writing – just as well since there is near constant rain and howling wind until the last day when all is blue again. On the final morning we take the 3-hour drive across the islands to Harstad so as to be close enough to the airport for our flight home the following morning. Harstad is a mess. Apart from some decent mountains across the water in the distance, it is a hodge-podge of roadworks, industrial estates and all the trappings of a busy town – a sort of Arctic Swindon. There’s no particular reason to come here. 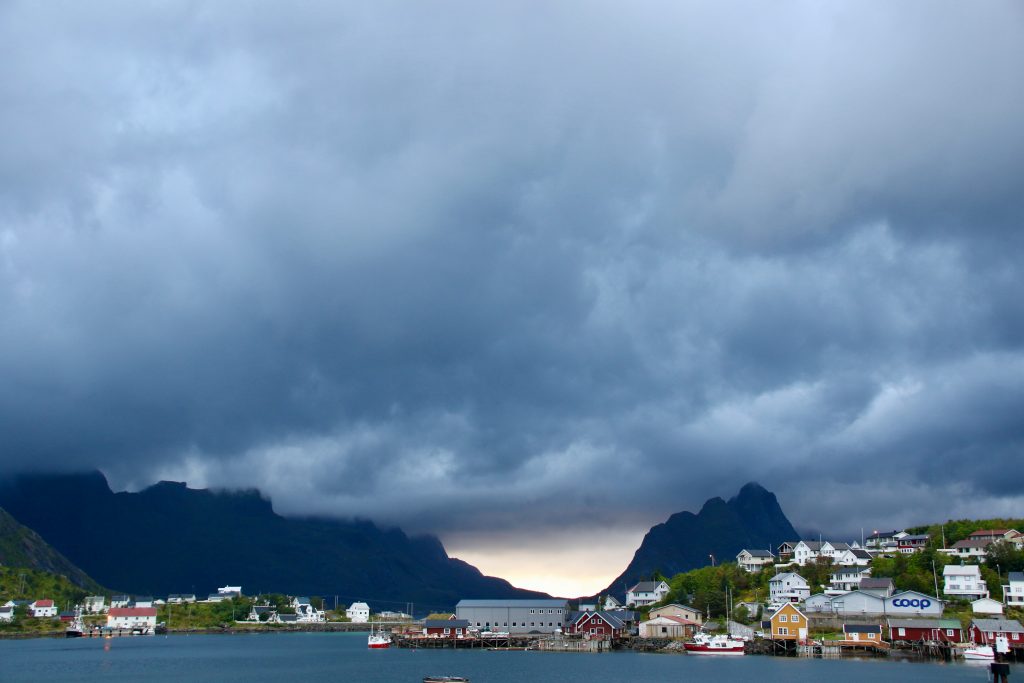 Closing remarks on the Lofoten area of Norway. Norway only has a population of 5.3m – only 7% of the 67m in the UK. They have 50% more land space, so overall it is thinly populated and spaced out by comparison. The capital Oslo only has 630,000 inhabitants. Norwegians don’t instinctively burst into a smile. In fact, they often look surly until engaged. In this part of the country, stand by for regular cruise ship invasions and, at this time of year, a lot of mobile homes and hikers on the roads. The weather is highly variable, so there is no point in complaining about the rain. And don’t moan about the enormous prices (two drinks = £20, an average bottle of wine £50, a meal £100). The locals are too polite to say it, but the rough message is: if you can’t afford it, don’t come. The landscape is sensational and that’s the main thing. Landscape 10, cost 6. Average score 8. 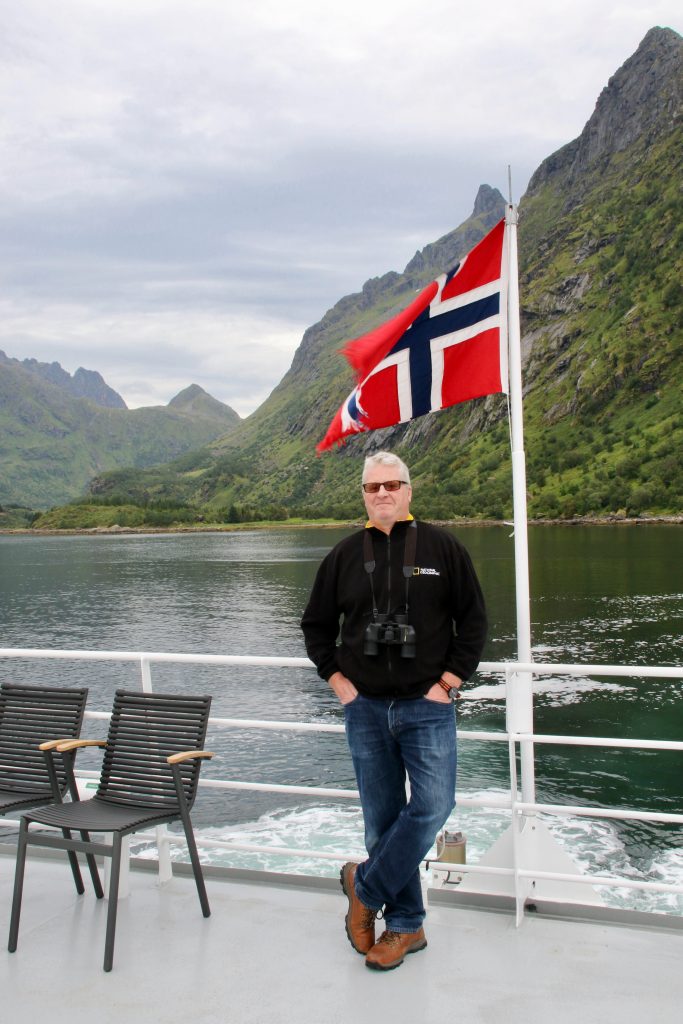 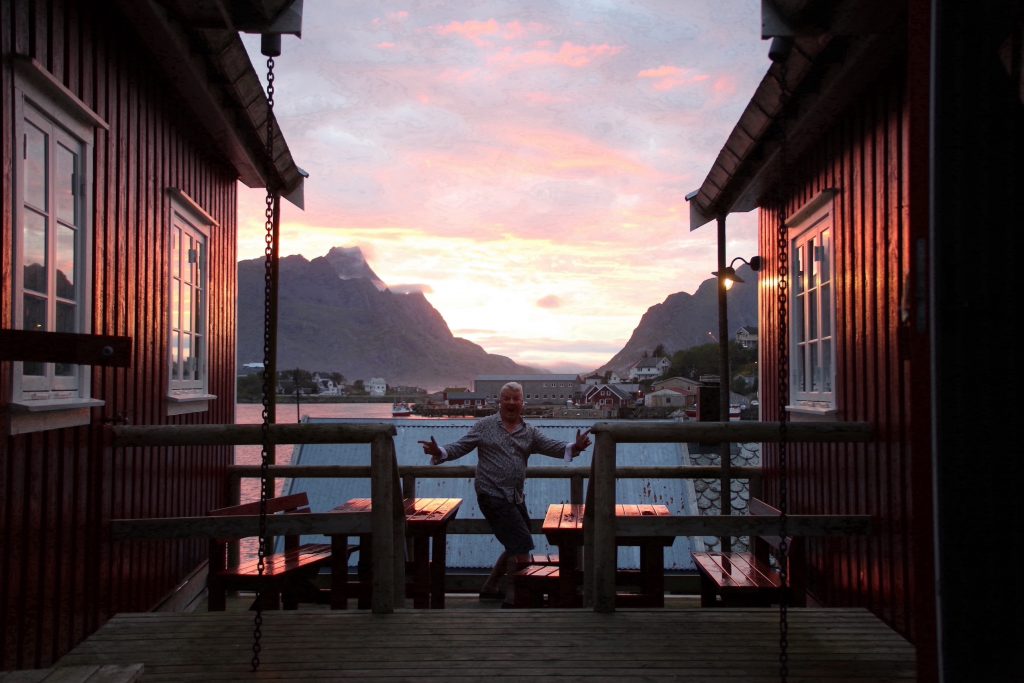 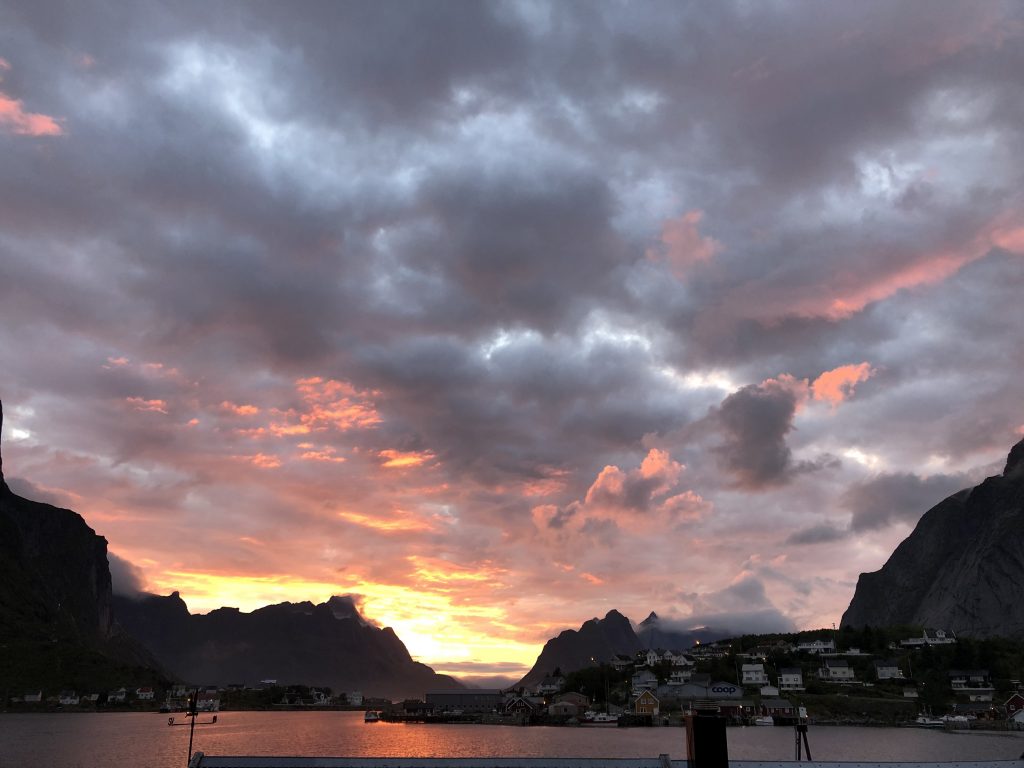 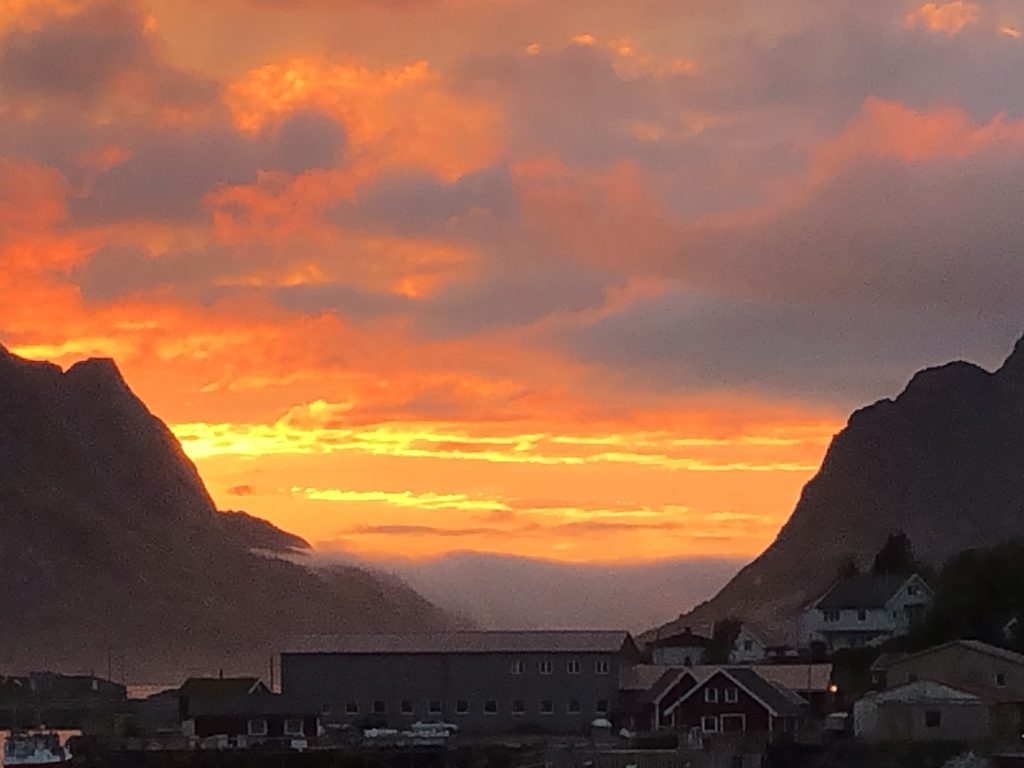