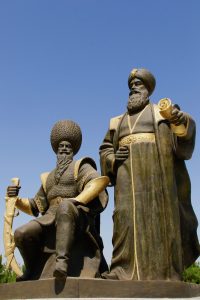 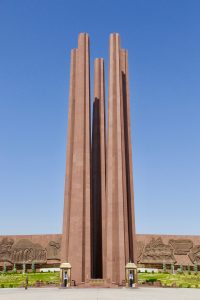 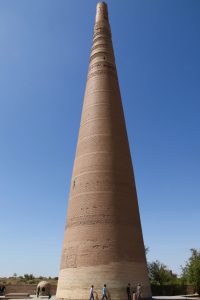 Off to the border at Shavat, where getting across is a more pleasant experience than the Tajik-Uzbek version. Here a limited number of people go through some paperwork. Throughout Uzbekistan it is mandatory to receive a registration card from every hotel you have stayed in, but the purpose of this is unclear. After queuing with a group from China we are through after an hour. Charmingly, tourists go first, although there are only 13,000 a year coming in to a country with a population of 6m.

We drive through Dashoguz to visit Konye Urgench, home to the original seat of learning that was the capital of ancient Khorezm. Here there is the Gutlug Timur, a 62-metre minaret that is the tallest remaining in Central Asia. It was visiting here that gave Timur the idea for the style of architecture he then imposed on Samarkand. There are also a small number of surviving buildings but most of it has yet to be excavated. Then we are off through the Karakum Desert to visit Darvaza, an old Soviet drilling exercise that went spectacularly wrong. Around 1971, they were drilling for gas when the crater collapsed and filled with water. This created a 70-metre diameter hole, so they decided to set fire to it so no one would fall in. Around 50 years later, it is still burning.

This creates an amazing spectacle that is particularly dramatic at night. We camp overnight, which is a surprisingly loud experience. People fizz around the valley on motorbikes and various combinations of tourists keep arriving to admire the view. It wasn’t overly crowded, but there are more quick visitors since they built a link road from the main highway. Too many people leave all their litter. The much-mentioned giant huntsman spiders fail to appear. There are actually two more craters of similar size a little further down the road. One is full of bubbling mud and is now also slightly on fire since a drunk local decided to set fire to a tyre and chuck it in. The third is full of water and plastic bottles blown in by the wind.

We drive 3 hours south to Ashgabat, where there are quite a few rules. All cars must be cleaned before entering, and they mustn’t be messy or overloaded, nor have anything hanging from their rear view mirror. A few years ago there was a drive to make all the cars white because this is the white city – all the buildings must be white by 2020, so everything is covered in marble, although on closer inspection, some of it is polyboard from Homebase. The idea was to win a bizarre competition to be the city with the most white cars in it. They love winning things round here, but they didn’t win. The place is immaculately clean, with monuments and grand buildings, plus an airport in a design that looks like a giant falcon. They claim that there are 1 million inhabitants , but the place feels pretty much empty. In fact, there are perhaps 600,000 people here, but they extended the boundary in order to qualify for various competitions.

We visit Old Nisa, a former Parthian site in the hills, and then check in to the Grand Turkmen Hotel. It’s functional. There is nothing in the mini bar and it’s unplugged. I go to reception to ask for a beer. They say go to the restaurant. They say they have no bottled beer but can pour draft into an old Sprite bottle. A boy runs to check. Actually, they have no beer. They say go to reception. Reception calls housekeeping. They say there is a bottle of beer in the room. Yes, I say, it’s warm and I need two, cold. Fifteen minutes later, two cold beers turn up, delivered by a somewhat breathless lady. There are hundreds of rooms in the hotel but there’s no one here, except the two shouting in the room next door until 1.30am.

The next day we tour around Ashgabat, the city of love. It is pixel perfect: no litter, advertising is not allowed, the streets scrubbed clean, underpasses freshly scrubbed with no smell of piss, not a beggar in sight. Since the 9.0 Richter scale earthquake in 1948, the whole thing has been rebuilt – initially in Soviet style, and then ultra-modern with strict rules – everything must be white. The National Museum is shut, but the memorial park is huge and impressive. It contains a museum that is empty, so a member of staff walks before us turning on the lights, and then sets off a reconstruction of the battle of Ashgabat, just for our pleasure. The Monument of Neutrality looks like a rocket, there is an encapsulated Ferris wheel that’s gold and shiny, the Turkmenbashy Mosque is vast and empty, and the National Independence Park contains suitably heroic figures of black and gold superheroes from days gone by. It’s surreal, a bit like one enormous film set.

After an exceptional day looking at monument after monument and being ferried around in a car (it’s impossible to walk – the city is spread out over miles), we have an excellent meal on top of a building overlooking the city at a restaurant called Ymyt Grill. Turkmenistan is bizarre but fascinating. 8 out of 10.