British Airways from Heathrow Terminal 5 works well: 7 hours and 40 minutes, and worth paying extra for more legroom in World Traveller Plus. Arriving around 11pm, the cab ride from JFK into Manhattan takes just 30 minutes via Queensboro Bridge, and is a reasonable $50 fixed fare. We are staying at the Algonquin Hotel on West 44th Street – arguably the hotel with the most character in the city, and former home of Dorothy Parker’s literary set and the New Yorker magazine. 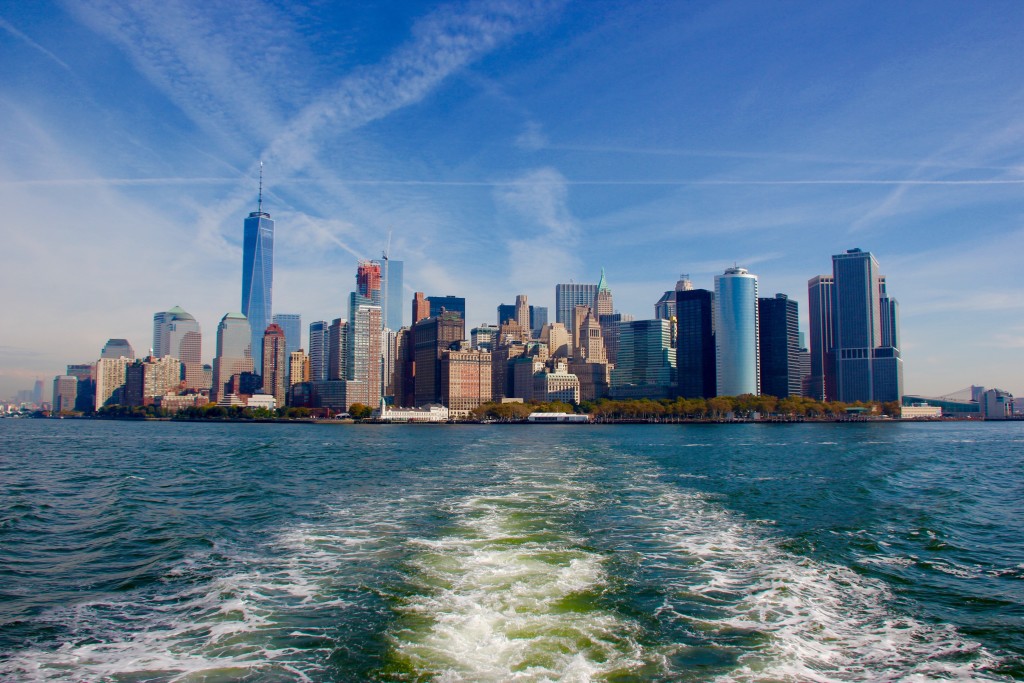 In the morning we take a long stroll up to Central Park and inspect the excellent zoo. Fifth Avenue takes you past the garish Trump Tower, all glittery gold, Barnes and Noble the famous bookshop, St. Patrick’s Cathedral, somewhat dwarfed by skyscrapers, and the charming Fairmont Hotel on the corner of the park. After examining the red pandas close up, spying the shy snow leopards, and wandering around the fascinating tropical house, we walk back to grab tapas at La Fonda Del Sol, a lively bar restaurant under the Met Life building. It’s worth taking a couple of minutes to stare inside the beautifully designed Grand Central Station, even if you’re not going anywhere. In the evening, we head to Madison Square Garden to see Billy Joel play his monthly residency – a great show preceded by sliders and beer in Penn Plaza. 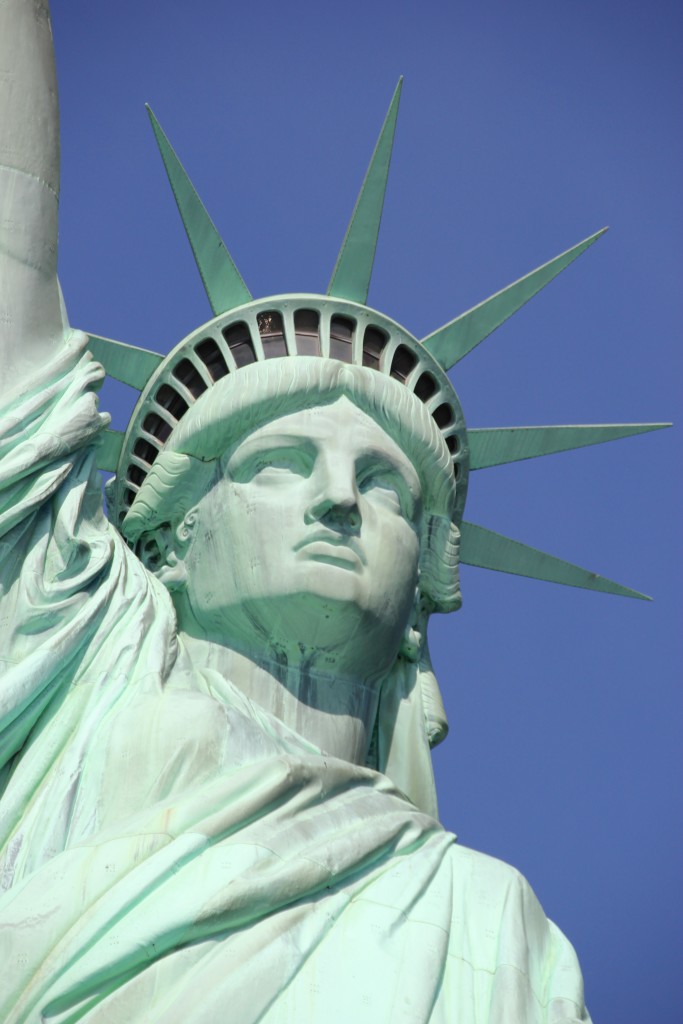 Day two we dedicate to the water, taking a cab all the way down the east side of the city on Franklin D Roosevelt Drive, past all the bridges: Williamsburg, Manhattan and Brooklyn, and round to Battery Park, where we take the ferry to Liberty Island. It’s crowded but the weather is fantastic, and we have superb views of the Statue of Liberty. Then on to Ellis Island, home of the immigration system, which for years screened anyone arriving in the USA. Then back for lunch in the sun at Pier A – fish and chips washed down by Brooklyn Long Hall Lager.

Nearby is ground zero, home of two memorials marking the original sites of the Twin Towers. These are now large square, deep set water features that appear to disappear into the ground. Opened this year is the brand new One World Center, an impressive observatory tower where you can go to the top in 60 seconds for an all-round view of the city. Some of the graphics and presentations are a bit over the top, but the views are superb, and the lift graphics on the way up cleverly build the city in front of your eyes as you rise. 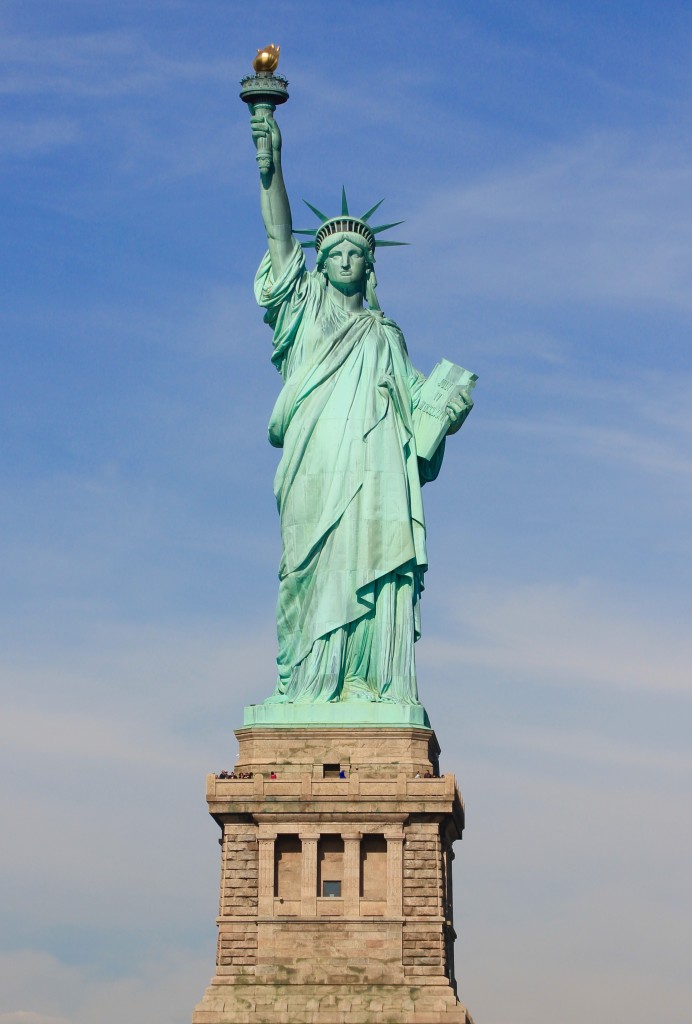 The next day is museum day, and we end up walking about 5 miles. First to the enormous Metropolitan Museum of Art. You could spend all day in here, so it’s worth having a plan. Technically it’s free, but with a suggested donation of $25 – a system that seems to work well. The nearby Guggenheim museum is conflicting. The circular building is itself the primary attraction, since the art is not very exciting. Alberto Burri (“The trauma of painting”) is not much to write home about, and the Kandinsky collection is crammed into an inappropriate cubby hole next to the café. We grab lunch at Demarchelier, a French café on Madison Avenue. A sunny walk through Central Park got us there, and on the way back it’s the posh Park Avenue and Lexington, eventually leading to a beer and frozen marguerita at Gina Mexicana on East 61st Street, followed by a short shopping blast in Bloomingdales, which seems more impressive than Saks on Fifth Avenue. We round the day off with a jarful of gin and tonic back at the Algonquin (“The Gonk”), and a bowl of pasta in a nearby bistro called Saju.

We are so close to Broadway it would be churlish not to take in a show. We opt for The Curious Incident of the Dog in the Night at the beautiful Barrymore Theatre on West 47th St. The setting is old style with gilt trimmings, but the show is ultra modern and excellent. The Glass House Tavern opposite serves an appetizing range of ales, so we loosen up with Lagunitas and White Rascal, no less. The American Museum of Natural History is midway up the west side of Central Park, and is really worth a look. There are massive sections on Central and South America, ingenious dioramas showing pretty much every mammal in the world, and a fascinating exhibition of live spiders. In the evening, it’s time for a birthday celebration dinner, and we opt for the opulent Barbetta on West 46th St. The place is ornate and stuck in a time warp, with chandeliers, old wood, and dodgy electrics attached to table top lamps. 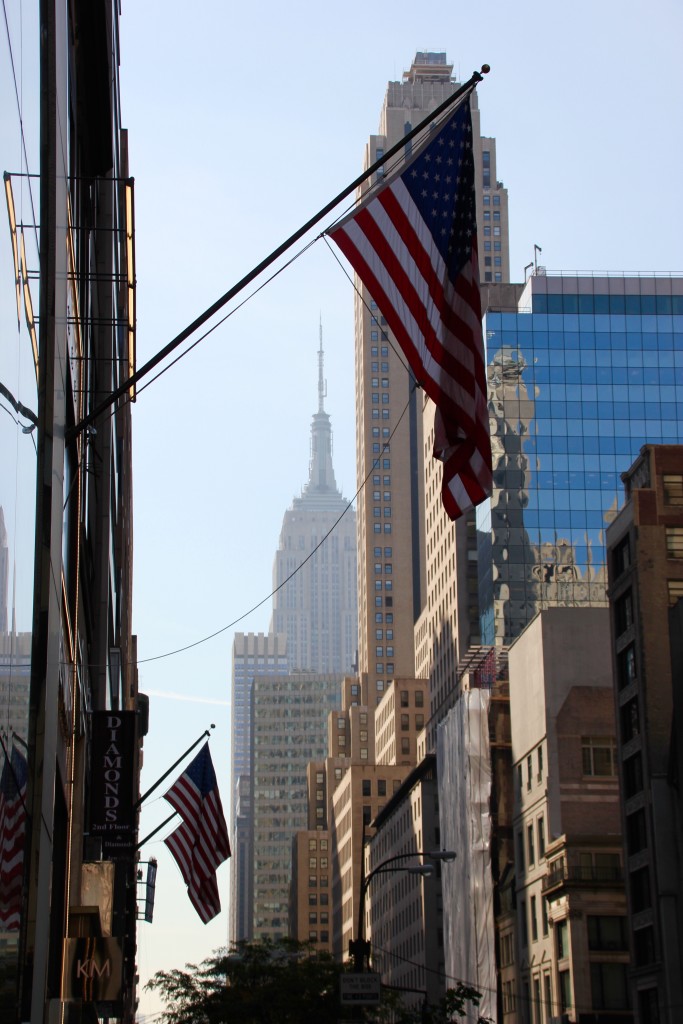 Probably the best place to eat in town (assuming you are not a vegetarian) is Frankie & Johnnie’s Steakhouse on West 45th St between 7th and 8th Avenues. This is an upstairs diner that has been feeding theatre goers and Broadway types since 1926. Pretty much any cut of meat in any style. My two pork chops were more than double what was needed, and the atmosphere is fantastic. By contrast the nearby Chatwal Hotel promises exciting artwork but is relatively static and formulaic.

On the final day we are looking forward to seeing the Harlem Gospel Choir at a brunch at BB King’s club. Sadly, it’s rubbish. The choir only has seven singers, the all-you-can-eat buffet is average, there are rambling charity wafflings in between songs, and the material is a confused mix of church music and 70s disco. For the final insult, they declared a price rise since ticket purchase so we had to stump up even more for the privilege. To be avoided. We retired hurt to the Heartland Brewery Chophouse on 43rd St to nurse nachos and Red Rooster Ale. 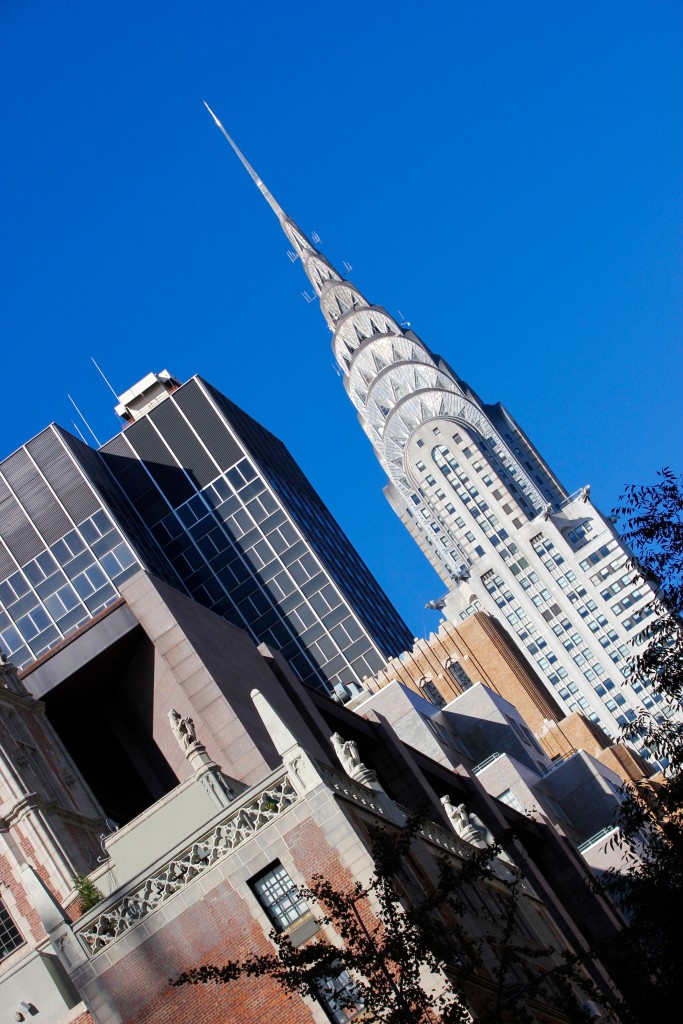 On the last morning we have a late flight so start with a stroll on the east side, down to the United Nations building, with some crystal clear shots of the impressive Chrysler building on the way. Tribeca, the triangle below Canal Street, doesn’t seem to be quite as hip as its reputation. It’s nice enough, but not exceptional. Canal St used to be much more bustling, and the iconic Tribeca clock has now had its fascia changed by the newly-refurbished Roxy Hotel. There’s a good Italian restaurant in front of it: Petrarca Cucina e Vino on White St. 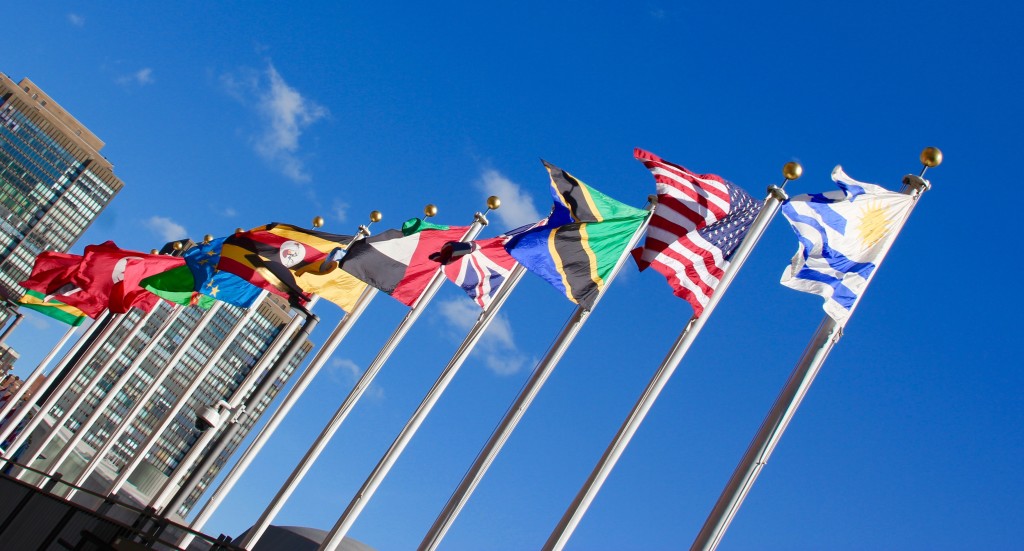 This was a seventh visit to the city for me. Everyone should come for a few days. The Empire State or another tall building such as the One World Center provides an excellent overview of Manhattan and prevents the need for an expensive helicopter trip. The Statue of Liberty is a fine monument which can be seen from the Staten Island ferry but it is worth going to Liberty Island itself. Central Park is charming, and the large museums are impressive, but keep an eye on what is on at the Guggenheim, because it might not be worth it. Broadway at Times Square is hideously crowded and commercial – to be avoided. New York is an intense city. Overhearing multiple conversations, there are a lot of frustrated people here. It is ball-breakingly expensive, particularly if you fail to take into account the city and state taxes, which can add 15% or more to many costs, mainly hotels and meals. Save hard and expect to pay through the nose. 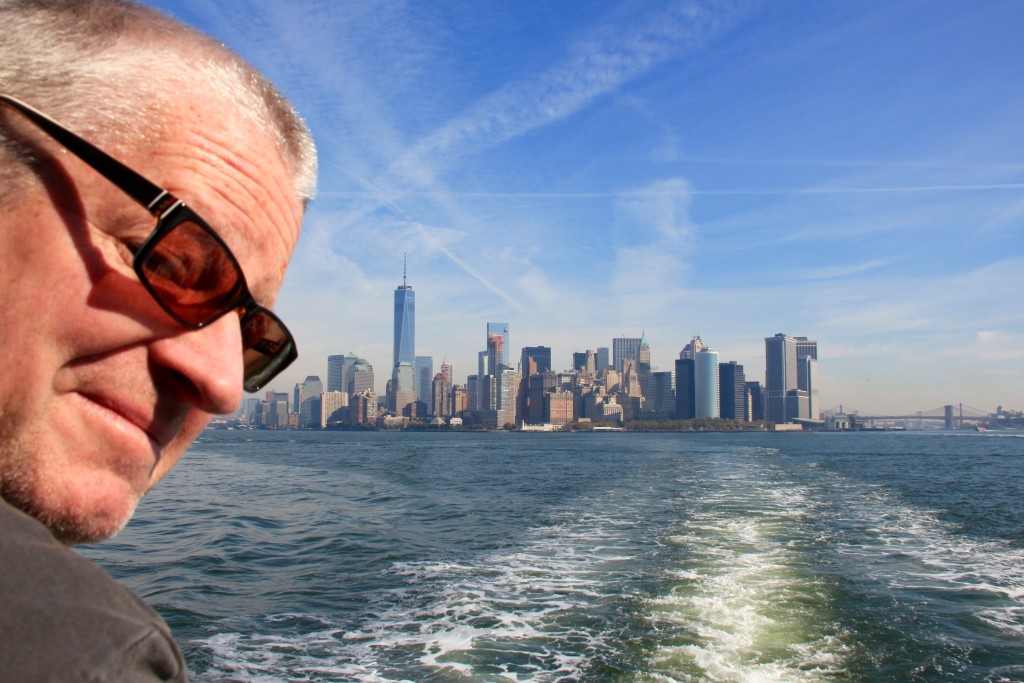 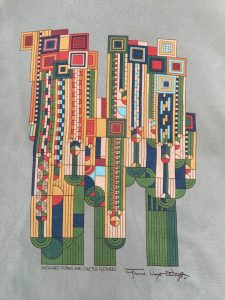