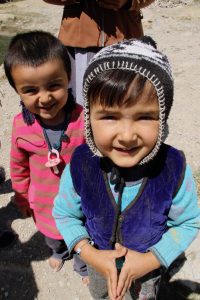 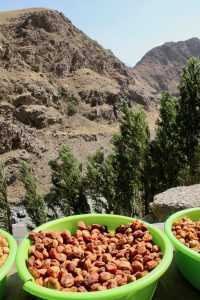 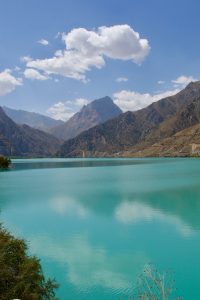 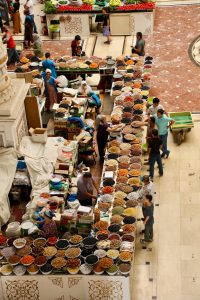 The Tajiks are a tough race who are keen to point out that their ancestors covered a much wider area than currently. Our Air Astana flight from Almaty is practically empty, and we are blessed with dramatic mountain views on the way. We land in Dushanbe (the capital, meaning Sunday) and are installed in the Hilton, formerly the Sheraton for some reason. Dushanbe was itself formerly Stalingrad, as is almost every city in the former USSR.

This is a fairly recent city, with the earliest accounts of settlement from around the 17th century. The Museum of History contains a series of relics, including a 5,000-year-old skeleton of a princess complete with burial jewellery, and Central Asia’s largest sleeping Buddha, albeit partially destroyed. Almost everything in this part of the world has been trashed repeatedly. A little way out of town lies Hissar Fortress – clearly not a very effective one since it has been razed to the ground no fewer than 21 times, by pretty much everyone you can imagine from Chengis Khan and Alexander the Great through to the Red Army in 1954. Nevertheless it’s a charming visit, particularly the museum in the madrasah and the reconstructed battlements.

In the late afternoon there is much to admire around Dushanbe. There’s Rudaky Park with its monuments and arches commemorating their favourite literary figure; the world’s biggest flagpole, apparently; the Somony monument to arguably their greatest leader; the library that is stuffed with books although few people ever go in; and thanks to our guide we are granted access to an extraordinary building roughly described as the Christmas Palace. It’s a bit like the Taj Mahal. Paid for by high rolling businessmen, it is bedecked with glass, precious stones (52,000 tonnes of them), huge wooden carved columns, gold leaf, and so on. It looks like a lavish film set and has hosted all manner of conferences, including the UN. Impressive, and a thought-provoking contrast to the predominantly poor rural population of 9 million.

We check out of the tower block Hilton which left a subtle note on the bed mentioning exterior cleaning and recommending that we keep curtains closed “in order to avoid any misunderstanding.” No one drops by, not even on the 9th floor. We strike out for Penjikent on the edge of the Western border with Uzbekistan. The border has just been re-opened after a 10-year hiatus, after a spat over water and gold. On the way we take a significant detour to find Isanderkul, Alexander the Great’s lake. He discovered everything around here and, as usual, it’s hard to work out how he got so much done before dying at the age of 33. The lake is accessed by a 24km dirt track, so it’s a moot point whether it’s worth the effort. It’s undoubtedly pretty, turquoise and classically alpine, but there is the usual brutal Soviet stuff on the way, pylons, and a rather crap café on the shoreline, so it’s not as much to write home about as you might imagine for all the effort. We arrive in Penjikent after a dramatic drive down a range of gorges, just in time to nip round the Rudaki Historic Ethnographic Museum, where we hear an almost exact replica of the talk in Dushanbe the day before. A busy day, the highlight of which was the stunning drive through the Fan mountains.

The ruins of ancient Penjikent are interesting but not exciting. It’s essentially a series of ramparts and mud walls that echo an old establishment. What’s needed are millions to excavate properly and turn this into an attraction. The political geography here is similar to the India/Pakistan border where idiots with rulers and no local knowledge carve up a landscape. Penjikent is only 60km from Samarkand, which is also full of Tajiks, but the latter is now in Uzbekistan. So with the border closed for the last ten years (recently reopened), thousands of families have been needlessly split up.

A short visit with no one else around provides a stepping stone to a more serious trip – thundering up the valley in a 4×4 to visit the seven lakes of Alexander the Great. It’s always about him. This takes a good solid 5 hours, with each lake becoming more and more inaccessible. Rugged, beautiful, broiling alpine water, preceded by some security checks over gold mining rights. This is a contrast of dry, dusty rock and endless water. After a celebratory plate of plov, the ubiquitous local rice dish, we begin phase two of the day – a fast three hour drive to Khojand. On the map in the UK, this looks intrepid and mountainous, and in some ways it is. But despite the rugged crags and hairpin bends, there is also plenty of low lying plains agriculture. It might be the time of year (August) but it doesn’t feel as frontier-like as perhaps it should.

We plough on. Turning north at Ayni, we rise steeply until entering the Shakristan Tunnel, which is a damn sight more palatable than the hellhole that was Anzob Tunnel on the way up to Dushanbe. Anzob was built by Iranians and was constantly flooded. They had to call the Chinese to come and fix it. We stride on through Ustarvshan to Khojand. This is a cosmopolitan city where the museum guide reiterates much of what we have heard in the previous two, but in a good way. There is a hotel mix up when we arrive that works in our favour – we are upgraded to the Parliament overlooking the Syr Darya River.

Tajikistan is a fascinating blend. Like many countries in this part of the world, it has a history of invasions going back thousands of years, and a cultural collision to match any region on the Silk Road. Emerging from the yolk of Soviet control, it is now establishing its own identity. A strong Tajik centre of gravity combines with a stunning landscape to make for a fascinating trip. Allowing for somewhat monotonous food and service that is still in its infancy, 8 out of 10.

A foot note to Tajikistan. We have noticed a significant state control issue throughout. The disconnect between the money at the top and the basic lives of citizens is fairly uncomfortable. The opulence at the centre is somewhat over the top. Isanderkul was effectively shut because the president’s wife was in the area. And on the way out of Khojand, most of the roads are shut and lined by thousands of police. The president is nowhere to be seen. He seems paranoid. We escape town and head for the border. We keep our phones switched off in case the thought police are tuning in.