It takes a good solid 6-hour drive to reach Almaty, a former capital with a permanent backdrop of the Zailisky Altau mountain range covered in snow. It’s hammering down with rain as we arrive on a busy Saturday, and many of the streets are flooded. Only in the morning do we get to see the mountains and it’s a beautiful sunny day for exploring. Panfilov Park contains a classic Soviet monument to the small brigade of men who prevented the Germans from reaching Moscow in WWII. It’s next to the immaculately rebuilt Zenkov Cathedral, a beautiful Russian Orthodox Church. Some guidebooks will tell you it’s made of wood and held together without nails, which is no longer true.

Wander over to the Green Bazaar – the central market – which is a much more orderly affair than Osh in Kyrgyzstan. It’s precise and clean, and organized with military precision. Then on to the Central State Museum, which is highly informative and pleasantly deserted. Here you can learn huge amounts about the history of the whole region from ancient times, following the path of the Scythians around 1000 BC through to the spread of the Mongols and Genghis Khan until he died in 1227. Coming right up to date, we discover that the long-standing president Nursultan Nazarbayev moved the capital from here closer to the Russian border to dissuade them from expanding in their direction, and that, in March 2019, he decided to name pretty much everything after himself. Astana is now officially called Nur-Sultan, as is the airport and the university. He must be quite pleased with himself.

We round off a really interesting tour with a trip up the cable car for a panoramic view in every direction – the city, the mountains, and everything else. Thoroughly enjoyable. In the evening we stroll from our hotel – the Rixos, large but excellent – through a park to, of all things, the Hard Rock Café. After a week of lamb, bread and potatoes it’s good to have something different whilst listening to Bon Jovi. Almaty is a good city and it is fascinating to contrast Kyrgyzstan with Kazakhstan. The latter has so much more cash and resources, but the latter has a hell of a spirit. On to Tajikistan. On this quick visit, 7 out of 10. 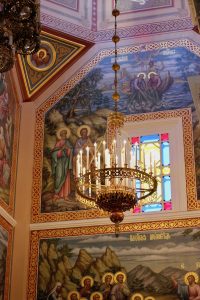 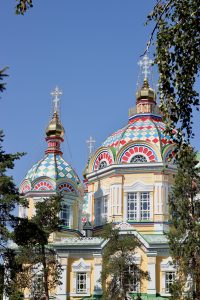 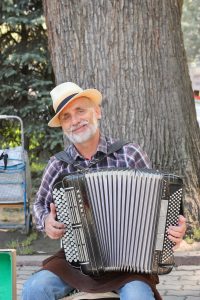