Although direct flights are now emerging, our trip to the Azores is via Lisbon, approximately two hours to Portugal and another two 1,000 miles west. The Azores is a volcanic archipelago with nine islands. Our first view from the air shows Santa Maria off to the south, followed by the main island of Sao Miguel to our right. A smooth landing at Ponta Delgada airport and a forty-minute drive east and we are safely installed in the Terra Nostra Garden Hotel in the spa town of Furnas. 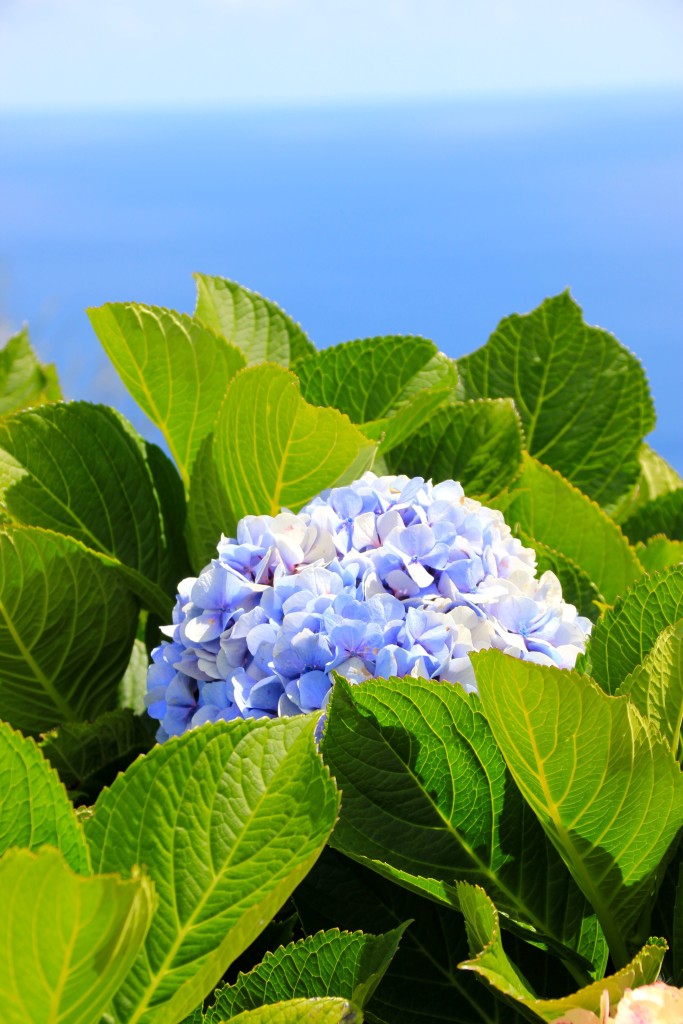 Furnas means cave rather than furnace, and is deep in a crater full of hot springs and sulphurous geysers. The hotel owns ancient botanical gardens that are charming to wander around, including a popular thermal swimming pool – pleasant despite its somewhat off putting brown colour. We relax and sample the local wine and beer before retiring for the night. 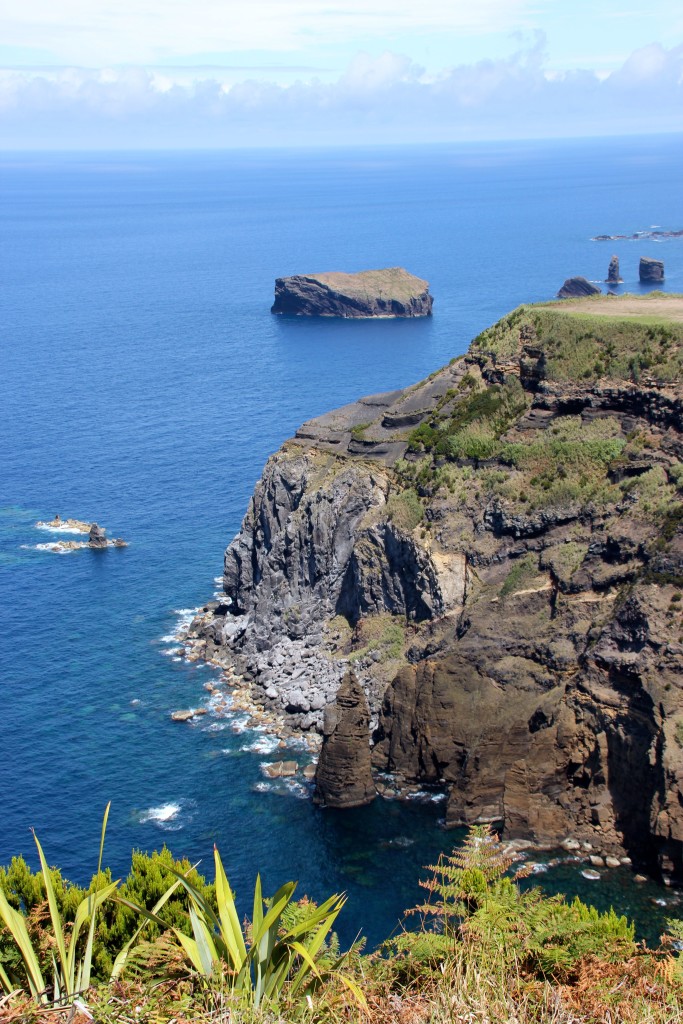 In the morning our hire car arrives, and it’s time to explore the island. We head west, past Ribeira Grande, then hugging the north coast. The fishing port of Rabo de Peixe smells, perhaps not surprisingly, of fish, with a bit of cow thrown in for good measure. There are cows everywhere on the island, and the Azores provides 30% of Portugal’s milk. Twisty coast roads, always flanked by hydrangeas, lead us through twee little villages such as Calhetas and Capelas to the northwestern tip of the island. Here we drop down to sea level at the brilliant Mosteiros, complete with idyllic black sand beach fronted by cliffs and stacks. The viewing point at Ponta do Escalvado gives us a chance to stare in American direction as twenty or so paragliders divebomb the cliff.

Then it’s up to the top of the caldera to look down on Sete Cidades, a small town in the middle of the famous blue and green lakes. It’s not outstanding from this side. It’s a bit better from the bridge that separates them, and the best view is high up to the south of the crater at Vista do Rei, named after the visit of King Carlos I in 1901. The light changes every few minutes in the Azores, so take your time. 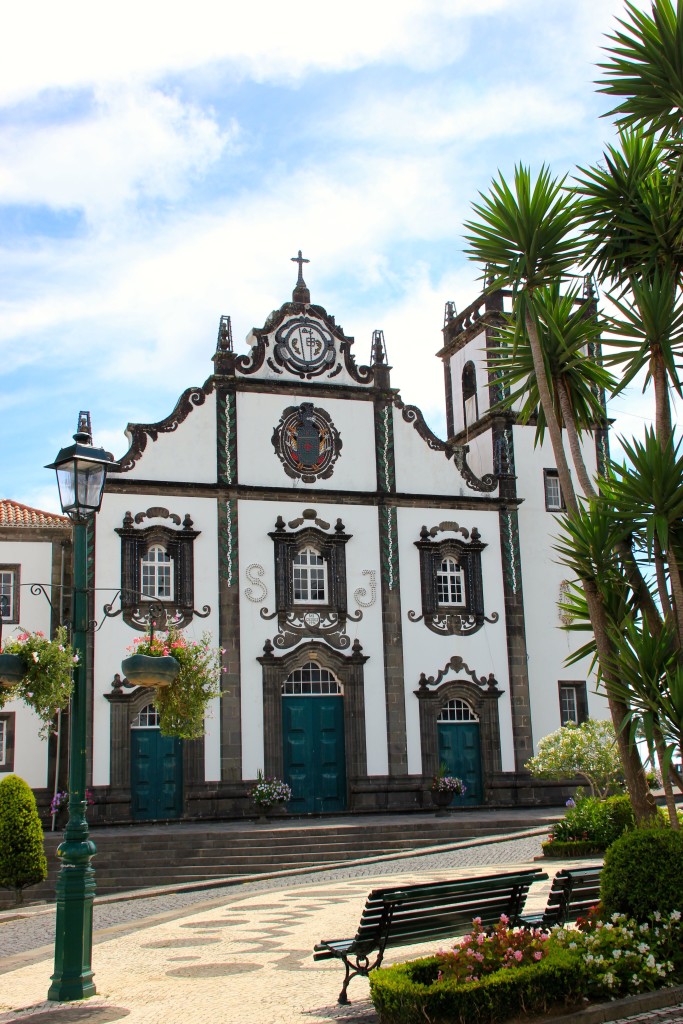 The next day we explore the east of the island, where few people go it seems. The best view on the day is the first: Salto do Cavalo at 2,500 feet overlooking the entire Furnas area, involving the stunning lake. There’s not much up here except cows and buzzards, and you can see the north and south coasts at the same time. The loop from Salga round to Povoacao has many a pleasing lookout spot, and the town of Nordeste has a dinky square and church. Ponta da Madrugada has beautiful gardens and thoughtfully provided barbecue gear where you can sit with a picnic and stare out to sea with only 1,000 miles of water between you and Europe. Completing the loop – a really nice drive – brings us through the not-very-nice Provoacao to Furnas. 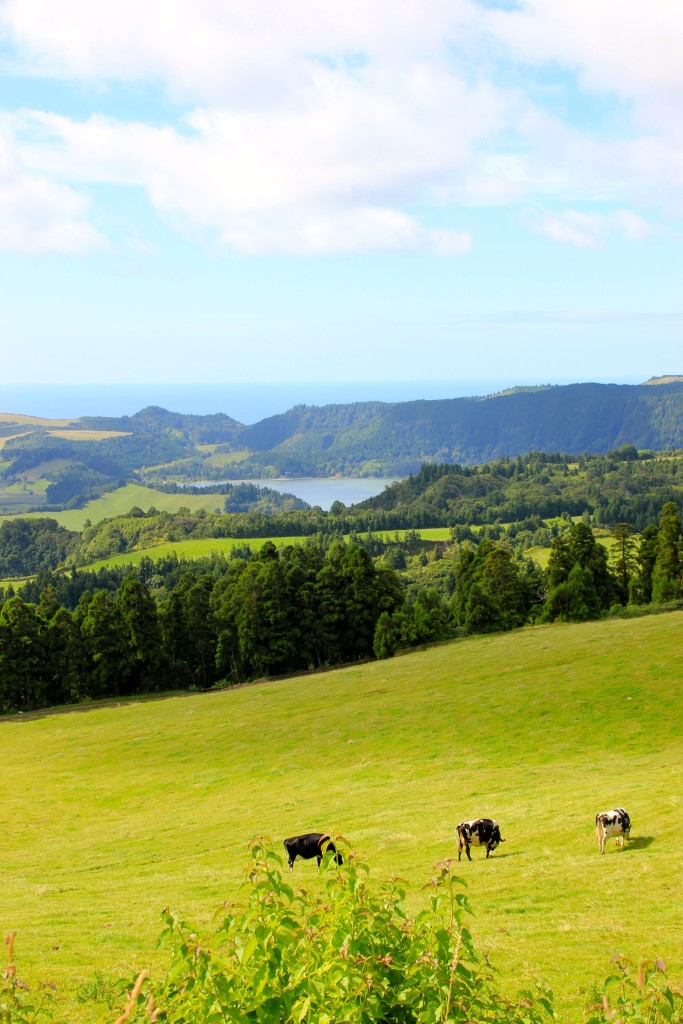 The next day we take a walk round Lake Furnas – pretty leisurely over a couple of hours and all on the level. There is an attractive old gothic church in one corner, and at the other end bubbling geysers where the local restaurants bury pots in the boiling water to cook the local cozido speciality. It all looks like a lot of faff when you could just use a cooker like anyone else. We then head off high to the west of the lake, and unexpectedly find a turret a few thousand feet up called Castello Branco. It’s not marked on any map, but provides a brilliant view for miles and is the ideal spot to eat a picnic accompanied by small birds and dancing dragonflies. 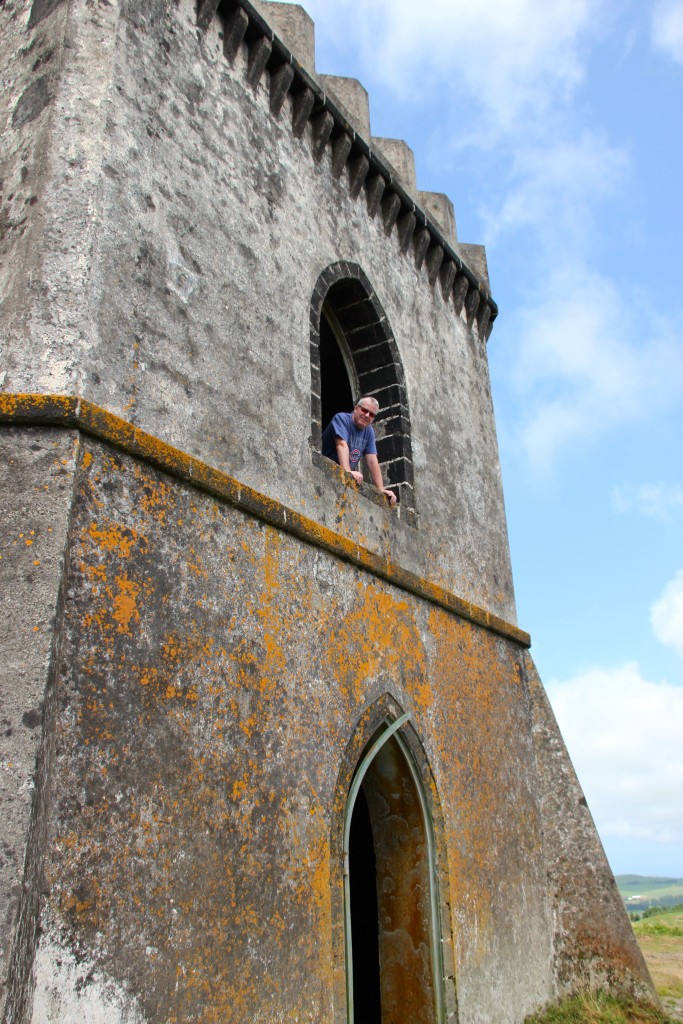 In the evening we strike out from the hotel to enjoy a couple of beers in the sun, and try our luck at Tony’s restaurant in Furnas. It’s not really a restaurant – more of a café, where pork and chips is served plain with a fried egg plonked on top, and a side portion of rice. Not recommended for gourmet dining. The local wine however can be excellent. Reds come with something of a health warning, but the Frei Gigante from the island of Pico is excellent. If in doubt, stick to the mainland Portuguese vintages such as Douro. 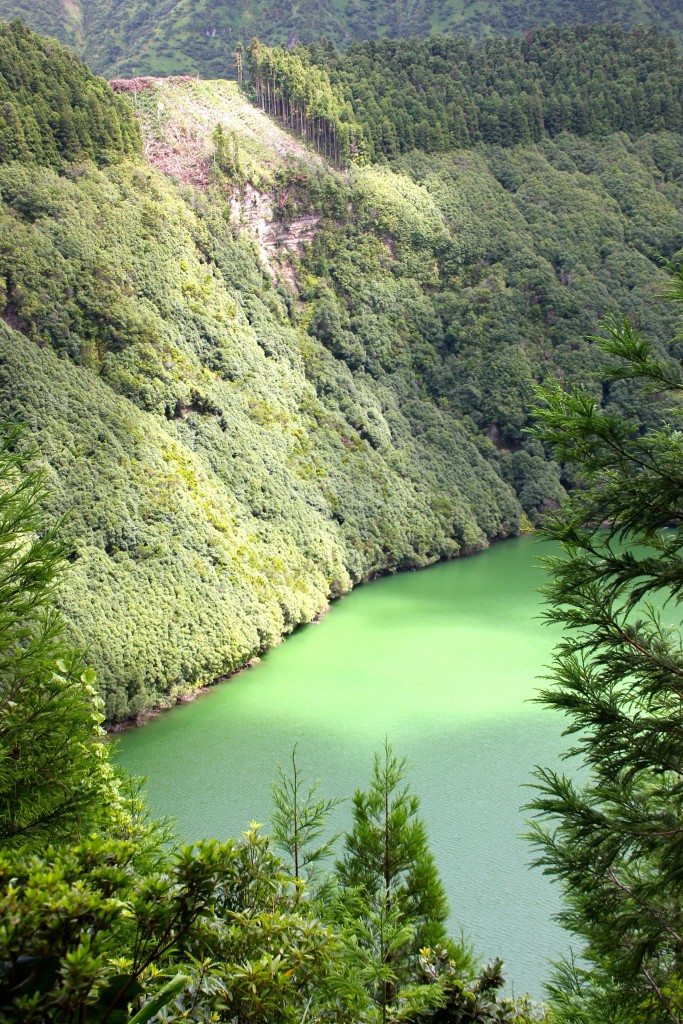 The next day the weather is fantastic, so we don the boots and head back to the craters at Sete Cidades, driving through Ponta Delgada and up past Covoada. Stop at any of the lookout points and follow a trail. At the very top we could see pretty much the whole island, with the blue and green lakes showing much sharper contrast in the bright sunlight. After a cheese roll sitting by the Lagoa Verde, we return to Furnas to indulge in a thermal swim in the brown pool in Terra Nostra Gardens. It’s pleasant enough, but the overall dirty feeling is confirmed in the shower afterwards – a light brown sludge covers the skin and stains your swimmers. Mmm. 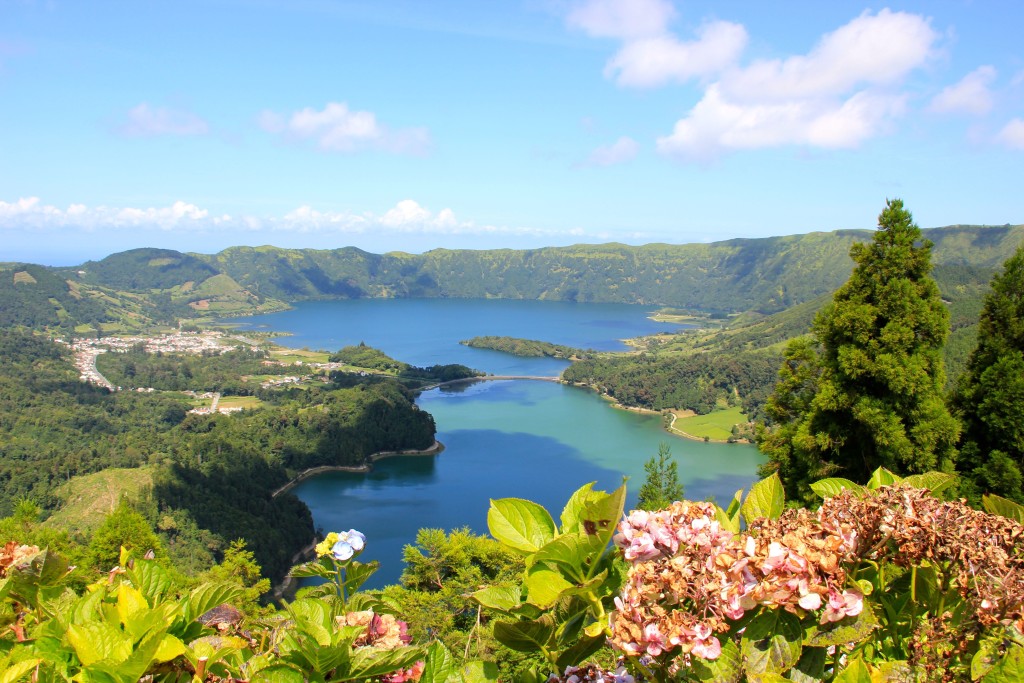 The following morning it’s raining, so we pack up our kit and wait for it to pass. A drive down to Vila Franca do Campo yields a view of Ilheu da Vila, a crescent-shaped island that was once a volcanic cone, with just enough room to get inside to the lake-like interior. High on the hill is the shrine of Senhora Da Paz, a steeply stepped affair covered in blue tiled scenes depicting a range of depressing activities such as flogging and crucifixion. A drive up to Lagoa do Fogo (the lake of fire) proves futile because the cloud is so thick that we can’t see a thing. So it’s onward to lunch in Ribeira Grande on the north coast, at the Alabote on the seafront. A little wind blown, but most enjoyable main courses of stroganoff and prawns wrapped in bacon.

We are up at six the following morning to drive to the airport and fly to Flores. But it doesn’t happen. The 8.45 flight begins by being delayed 15 minutes, and then another 30. By ten o’clock the pilot and crew have given up and the flight is cancelled. Apparently this happens quite a lot. Although the Azores is one administrative system, the two westerly islands of Flores and Corvo are another 1.5 hours to the west. As well as being the most westerly point of Europe, they are even on a different tectonic plate, and so do not suffer from earthquakes. So, while it’s perfectly fine conditions here and okay to fly to the local islands, or even east to Portugal, our destination is in the midst of a raging storm. The airline quite fairly gives us free taxis to the hotel, plus meals and a bed for the night, but we have a larger issue to consider. With a massive storm over Flores, we are in for a bumpy, delayed flight at best, a miserable time when over there, plus almost no chance of our planned boat trip to nearby Corvo (“weather permitting”). Plus there are no return flights on a Sunday, thus increasing our chances of failing to get off the island in time to catch our flight home.

It’s time for plan B. We change everything, cancelling all flights to and from Flores, and adding the next three nights to our intended final one at the Royal Garden Hotel in Ponta Delgada. The weather on Sao Miguel is holding, and we enjoy a day in the sun by the pool, rounded off with a nice stroll through some of the older backstreets of town, a pre-prandial gin at the Sports Bar, and an excellent Italian meal at Mimo on Dr. Gil Mont Alverna. There isn’t a vast amount to explore in town. There’s a small fort and military museum, a pleasant square at Campo Sao Francisco, and a pretty enough church and arches at Praca Goncalo Velho Cabral. The view out to sea, however, is somewhat spoilt by a significant container port and marina with docked ocean liners. In fact, it’s probably the worst view on the island.

We try a range of bars and restaurants, and most are fairly average. O Corisco for instance on Rua Manual da Ponte looks enticing but serves medium cuisine – the ham and melon is actually spam and melon, and they perpetrate the local tendency to serve chips, potatoes, rice and school vegetables with every dish. Sauces are rare, and often it’s a case of a chunk of meat or fish plus any or all of the above. Plus perhaps some Heinz sachets for good measure, and rarely any black pepper. The best place we found was called Reserva, but it’s hard to find. It’s in a tiny cul-de-sac called Travessa do Aterro tucked in between Ria Dr. Luis Bettencourt and the arches, just off the Avenue Infante D. Henrique. The wines are fantastic and the tapas format allows you to sample all kinds of sausage, cheeses, fish and so on. Worth exploring to find it. 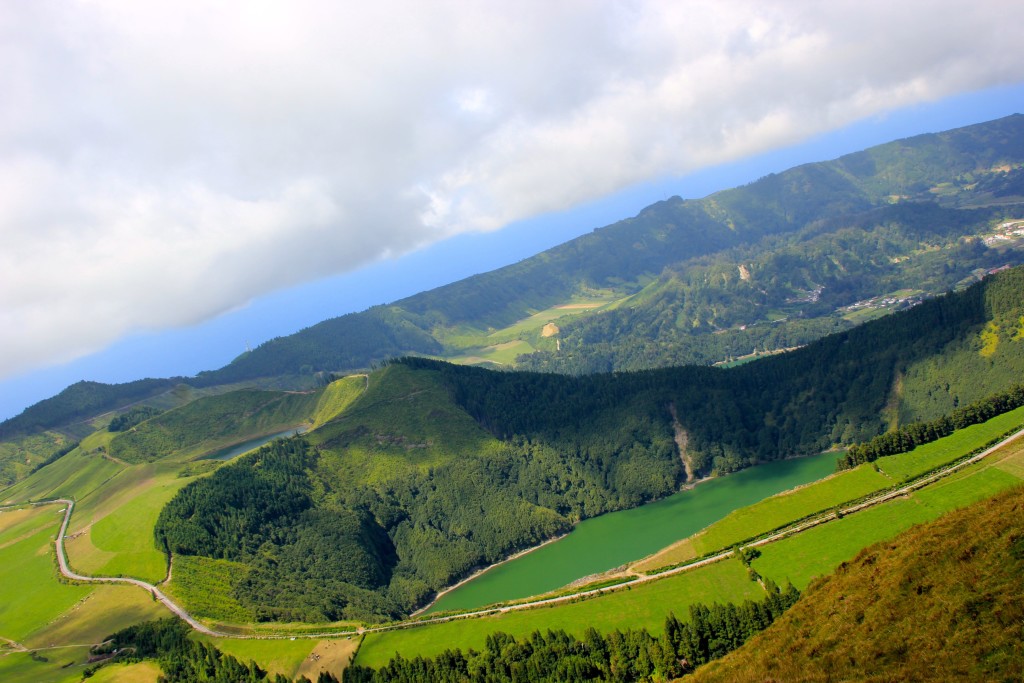 The weather remains somewhat temperamental, and it becomes clear that we did well to achieve all our outdoor activities in the first half of the trip. The clouds move fast, and in the main change is only a few minutes away. But there is some form of cloud every day, and sometimes a good solid downpour for an hour or two. You don’t come to the Azores for the weather. The outdoor activities are great if you like that sort of thing, and the landscape can be breathtaking – if you can see it. It can be a bit frustrating to climb a volcano and see nothing at the end of it. But on a sunny day, the combination of sun, volcano, lake and near-endless coastline can be exhilarating. Other than that it’s pretty standard fare. The food isn’t very exciting, and Portuguese history is mainly an endless series of churches. So overall, 6-7 out of 10. Lovers of hiking with a sturdy disposition will enjoy it. Those looking for guaranteed sun and sand won’t. 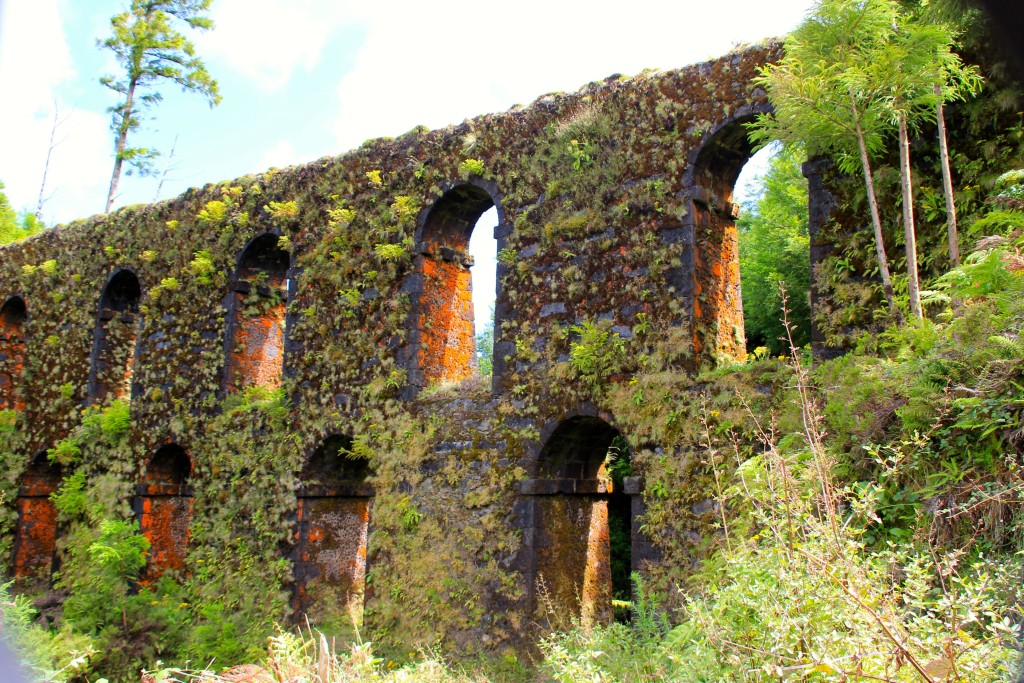