“Money – give me money”, demanded the charming man at the airport immigration desk.  As a UK citizen, you are stung for the highest possible prices the Zimbabwean government can squeeze out of you: $55 on arrival and $20 on departure.  A quick calculation revealed that this probably netted them about £12 million a year from this one entry point alone.

The Victoria Falls Hotel is massive and sumptuous, overlooking a spectacular wrought-iron cantilever bridge that spans the Zambezi River gorge.  It was made in England and brought in pieces, with construction occurring from both sides simultaneously.  When they met in the middle in 1905, it was 6 inches too long, so they waited until the morning of the following day when the metal had cooled down, and it fitted perfectly. The roar of the falls is a permanent feature, as is the cloud-like pall of spray that rises high into the air.  Mosi-oa-tunya is the local name: the smoke that thunders.  We took a walk down to the falls which are highly impressive, even in the winter season when the water level is at its lowest,  The wide rambling Zambezi, the fourth longest river in Africa behind the Nile, Niger and Congo, is calmness personified until it plunges over a series of huge basalt precipices on its way to Mozambique and the Indian Ocean.  The main fall claims to be 1700 metres wide, dispersing 143 million gallons per minute, figures so mind-boggling that further calculation seems pointless.  The photographic opportunities are countless, and we stroll back to the hotel.  Cape Town 1600 miles, Cairo 5100 miles, declares a plaque beneath a flagpole.  That’s a very long continent, and one that Cecil John Rhodes (of Rhodesia fame) wanted to span with a railway.  His dream was realized, but he died beforehand, and the hotel still honours the vision in its logo showing him between a lion on one hand and a sphinx on the other.

David Livingstone was the first to publicise the falls in 1855, although probably not the first technically to discover them, and the famous “Dr. Livingstone I presume” line was not delivered by the New York Reporter Henry Morton Stanley here.  He actually tracked him down in 1869 on the shores of Lake Tanganyika, having not been heard of for a very long time because he was holed up in bed suffering from malaria.  The temptation to take a helicopter ride over the falls was too great.  I had never been in one before and the view of such a geographic spectacle was an irresistible temptation.  This involved crossing the border into Zambia to a helipad on a hill dominated by an enormous Baobab tree.  These have thick trunks and spindly branches, causing the locals to say that they were thrown by God on to the earth only to land upside down.  “For the flight of your life” announced the welcome board.  As a novice, I wondered whether fright would be more appropriate.  The helicopter took six passengers and for 15 minutes we were treated to views of the falls and all four of its notched gorges from every conceivable angle.  Exhilarating.

Another way of viewing the Zambezi River at close hand is to charter a boat.  We were picked up by the charmingly named Future, who took us down the river to the edge of the falls, and into a few nooks and crannies on the way.  His story was a sad one.  Since the recent troubles, visitor numbers have declined so dramatically that he is the last of 31 staff formerly employed by the boat company, and six of the seven boats have been sold.  We were the only passengers and so had the boat to ourselves – a perverse pleasure.  Two “firsts” followed.  The first viewing in the wild of Hippopotamus.  These are grumpy, highly territorial creatures who habitually guard the same patch of shoreline.  One male has up to 20 females, lucky man, and they are responsible for more deaths in Africa than any other animal, despite being vegetarian.  Amazingly, they cannot swim, so whenever you see those cute pictures of their ears poking above the waterline, they are actually standing up.  They can also hold their breath for eight minutes, which can make spotting them a tricky business, particularly since they are mainly nocturnal.

The second “first” were crocodile.  Totally motionless, the Nile or freshwater crocodile can grow to 18 feet long and slow its metabolism so much that it needn’t eat for three months.  Eggs hatching at high temperatures turn out to be male, and lower ones female.  Future spotted one skulking on the bank behind a screen of reeds.  Many others were visible later imitating rocks on small islands midstream.  Other delights emerged on the way: the African Darter or Snakebird, drying its wings in the sun after fishing; white fronted bee-eaters with their bright green livery, flitting in and out of their nests, burrowed into the fine sandbanks; pied kingfishers dive-bombing the water; a yard-square hamerkop nest with its upstairs and downstairs compartments for his and hers; and a lone elephant munching his way through his own personal island having walked across from the main bank.  We stopped on an island for a drink and a bite, and then headed home with the sun setting perfectly over the Zambezi – first equal to my experience sitting on a boat watching the sun go down over the Orinoco.

The next day’s challenge was a trip to an elephant refuge to meet the inmates – fifteen orphaned elephants.  Population pressure and poaching have reduced their numbers hugely in recent times, and some end up in trouble.  After a half-hour drive down a seemingly endless dirt track, we arrived at the refuge.  It took a little longer than usual as we paused to let a strange looking snake cross the road.  It seemed unusually fat, as though it had just eaten a large meal, although my understanding is that they usually remain stationary while digesting.  We were greeted by an Alsatian with three legs, a tiny Jack Russell and a tame female impala.  Various elephants were introduced – all orphaned in a variety of ways and some with more tragic stories than others.  The worst concerned a bull who had had the pad on his foot ripped off by a snare.  He could walk, but only limited distances, and he wouldn’t have survived in the wild.

This was my first ride on an African elephant, although I had often been on their Indian counterparts.  There is almost no tradition in Africa of using elephants as semi-domesticated workhorses, taxis and so on, and they do not have an equivalent for the Indian elephant-handler word Mahout.  But they are working hard on the science of it: the elephants can understand fifteen different commands in English, and undergo disciplined training every day.  In between their two daily walks, they are free to roam the bush.  We mount Jake, a 21 year old, and embark on a charming stroll through the bush.  Jake is nearly three metres tall, so this is a high vantage point from which to view the world.  I am at the back of the beast – the last of three passengers.  Not that he’ll notice the weight because Jake weighs three tons.  But it does put me that bit closer to his alimentary functions.  A burst of elephant flatulence can last a good thirty seconds, and when he decides to relieve himself it’s a bit like sitting on the roof of a bungalow with somebody hurling buckets of water and boxes of bricks over the edge.  The smaller elephant, a one year old whose name I can’t pronounce, meanders in and out of the line, sometimes taking the lead to prove his virility, but he will not be ready to take passengers for some years yet.  We return to camp and have the opportunity to feed the elephants – pushing feed into their trunks, which they instinctively twist into a cup shape, shooting the contents back into their mouths. 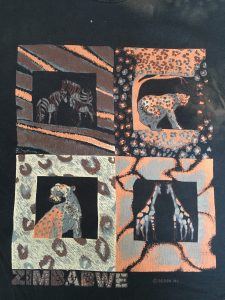