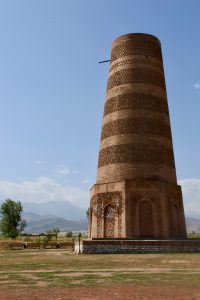 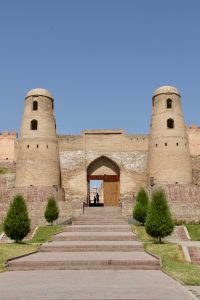 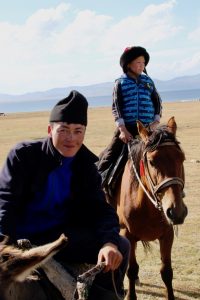 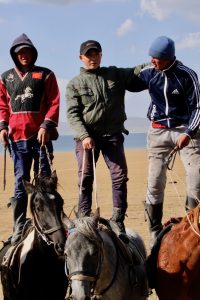 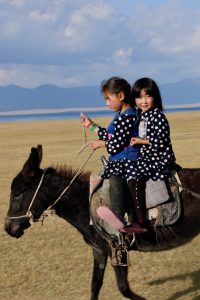 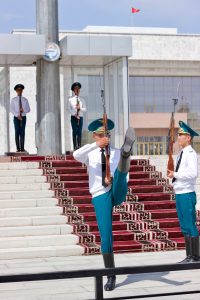 Arriving from Istanbul on a comfortable 5-hour flight, albeit at the slightly antisocial time of 9.30pm, arriving at 9am. After a catnap at the Orion Hotel, we take a short stroll round the city. It’s classic former Soviet stuff – sweeping boulevards, massive monuments and buildings, and a topsy-turvy story of highs and lows going back through the centuries. Forty traditional tribes or ethnic groupings make up the Kyrgyz, represented by 40 flames on the yellow sun on their flag. There are 6 million people in the whole country, and 1.5m in Bishkek, but the place is essentially empty, so it’s a charming stroll around the parks and boulevards, lapping up the stories behind the statues. Admittedly, Osh market is heaving, but that’s true in every city.

3,700km from Istanbul over the Black and Caspian Seas, this is a diverse and fascinating place, bolstered by the legend of Manas, who united the Kyrgyz people in the 10th century. Stories of his heroics were handed down orally and it takes days to recite the whole thing. Fragments were jotted down in Russian in 1858 and eventually recorded in its entirety in the 1920s. This is the spirit that unites 40 Turkic speaking tribes between the Tien Shan and Pamir mountains.

We head east along the Chu Valley to visit Burana Tower, an 11th century banded brick minaret. It is all that remains of the city of Balasagun, built by the Karakhanids who brought Islam to the region. It was destroyed by an earthquake or several, the last one being in 1900. The current 25m version is half the height of the original, and can be entered by a functional wrought-iron set of steps leading to a tiny stairwell that you effectively have to crawl up to reach the top. As usual some idiots have carved their names into the hatch at the top. There is also a small collection of balbal, stone grave markers with a variety of petroglyphs on them. Uncrowded and highly rural, there is a long-term plan to reconstruct the entire mosque, but who knows?

We drive on to Song-Kul Lake (“the last lake”). It is high altitude at 3,000m, a picturesque bowl of summer mountain pasture reached by climbing over the Kalmak Ashu Pass. There are grazing herds of horses, sheep, goats and cattle everywhere. We stay at a yurt camp, which is a chilly experience. The first night is interrupted by partying drivers who invade the tranquility. Once I had persuaded them to stop, a series of huge thunderstorms did not make for a restful night. On night two we moved further away from the trucks and the generator – a more peaceful experience. You can also ride with Kazakh horsemen and go hiking – weather permitting since it is so changeable. Stunning scenery and brutal extremes are the themes here.

We head off the next day to Chon Kemin Valley. The Dungans are muslims of Chinese origin who mostly live in this area, so a Kemin Dungan is a strong possibility. We stay at the charming Ashu guesthouse in the village of the same name. It’s a poor farming area ideal for walking in the hills. We also pop into a local trout fishery and stop to look at the gorge, which corrals a wide river into white water rapids when met by a tributary.

Then it’s on to Kazakhstan. So far we have been hemmed in by China to the east. Now it’s north to Kazakhstan – the biggest landlocked country in the world, the same size as the whole of Western Europe, and yet with a population of only 18m – about twice the size of London. We try three different entry points, finally succeeding on the third. You don’t need a visa from the UK, so it’s a reasonably fast process.

Kyrgyzstan is fantastic. There is so much to learn about the collision of cultures in Central Asia. 9 out of 10.