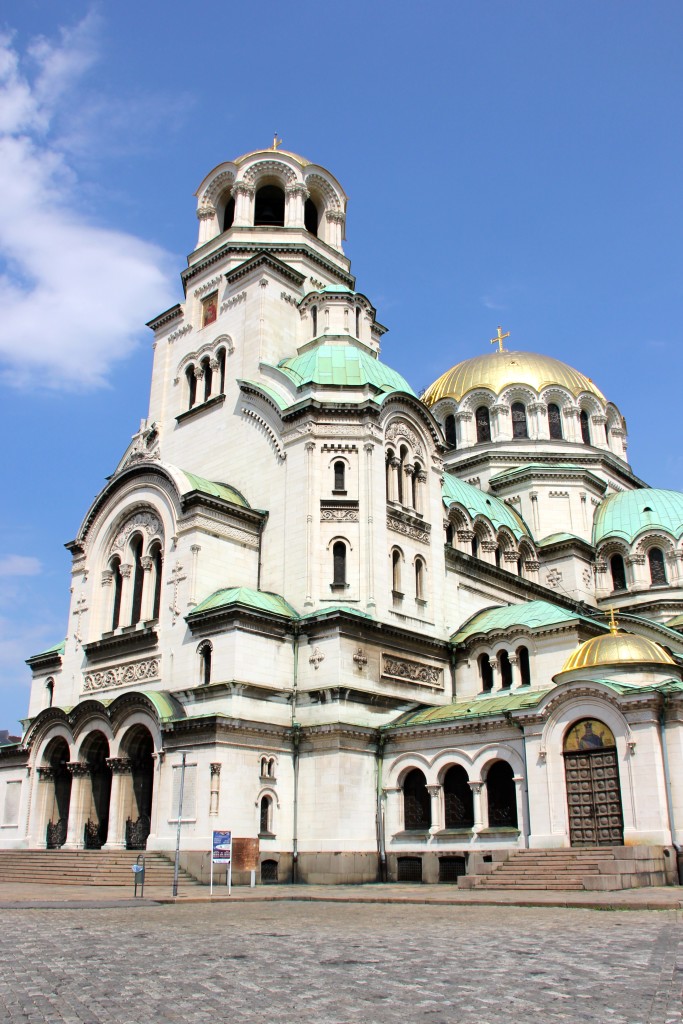 Eastern European visits to Romania, Hungary, Macedonia, Albania and more have whetted the appetite, so it’s off to the Bulgarian capital for three nights. It’s a 6am flight and several of the youngsters are hungover or throwing up, but never mind. Just missing a significant storm, we descend into the Danubian Plain in front of Mount Vitosha and land in the compact Sofia airport, two hours behind UK time.

We are picked up and taken to the Grand Hotel, which looks like a low-level glass office block. Our corner suite is bigger than our house, and full of dark wood heavy furniture. We stroll out first to the Monument of the Liberators, a statue of Alexander II of Russia on a horse, leader in 1878 when the Russians did indeed liberate Bulgaria. He is standing proud in front of the relatively unremarkable National Assembly building. Far more impressive is the gold-domed Aleksandur Nevski memorial church, which glints in the sun and has pleasing yellow-amber light inside courtesy of the stained-glass windows. 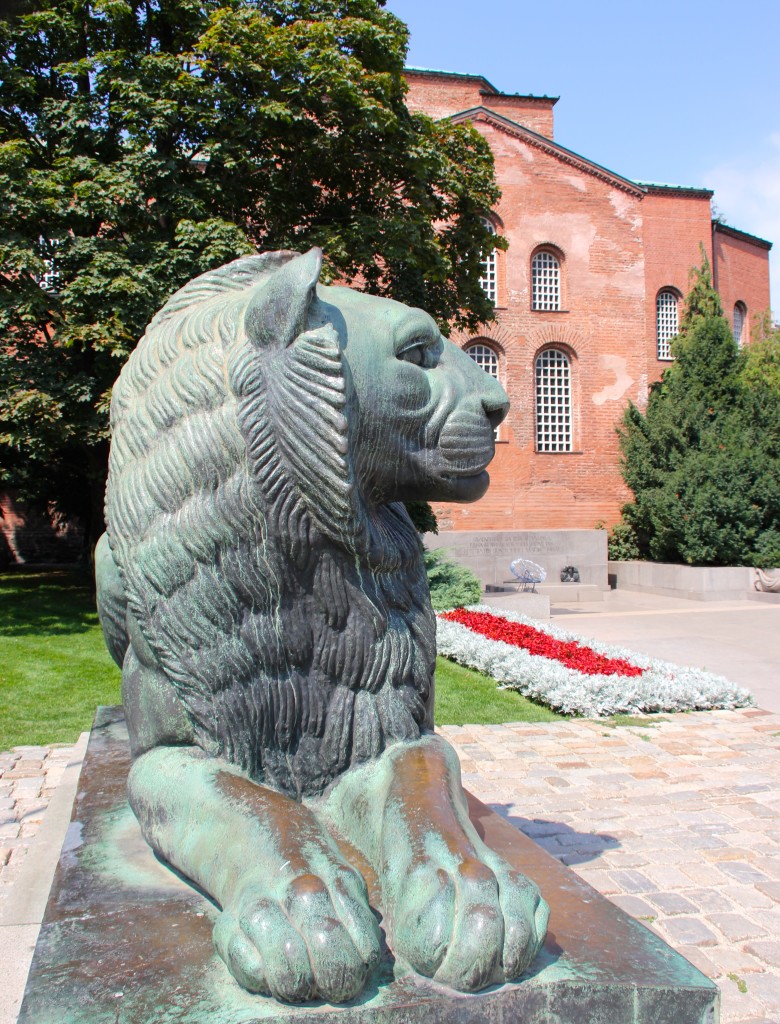 The church of Sveta Sofia (“holy wisdom”) has a decent lion statue out front, and the petite Russian church is arguably the most attractive building in the city. Just after wandering back to the hotel for a cleansing Zagorka beer, the heavens open and a massive lightning storm lashes down for a solid 30 minutes. An excellent dinner in the Shades of Red restaurant includes local mushrooms, and excellent pork washed down by Bulgarian wine of the highest quality at less than £15 a bottle. 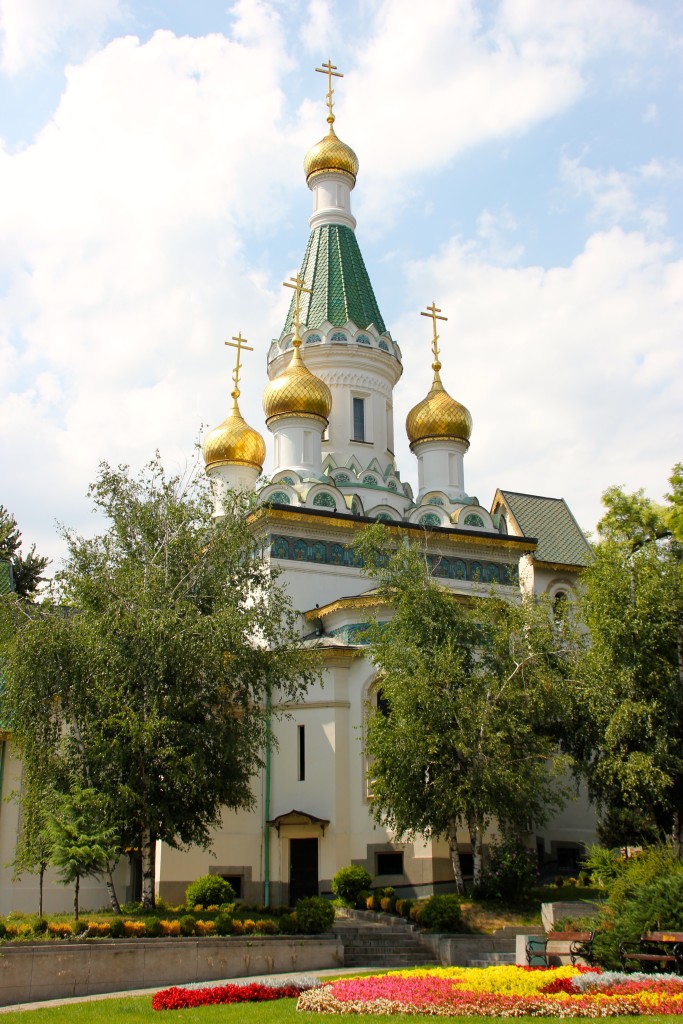 The next day we walk west, and take in the large Sveta Nedelya mosque, and the looming black figure of the monument to Sveta Sofia. Capped in gold and holding an owl, she was erected in 2000 to replace Lenin who was ripped down ten years earlier. The Ottoman-inspired mineral baths are an attractive sight, but the central market hall is somewhat functional. There’s a few minute’s entertainment to be had on the hour with the changing of the guard outside the presidency building, while the archaeological museum opposite has some interesting stuff from early Thracian days. As usual, everybody has been beating each other up for centuries, and the Bulgarians, Turks, Serbians and Macedonians all feel hard done by one way or the other. 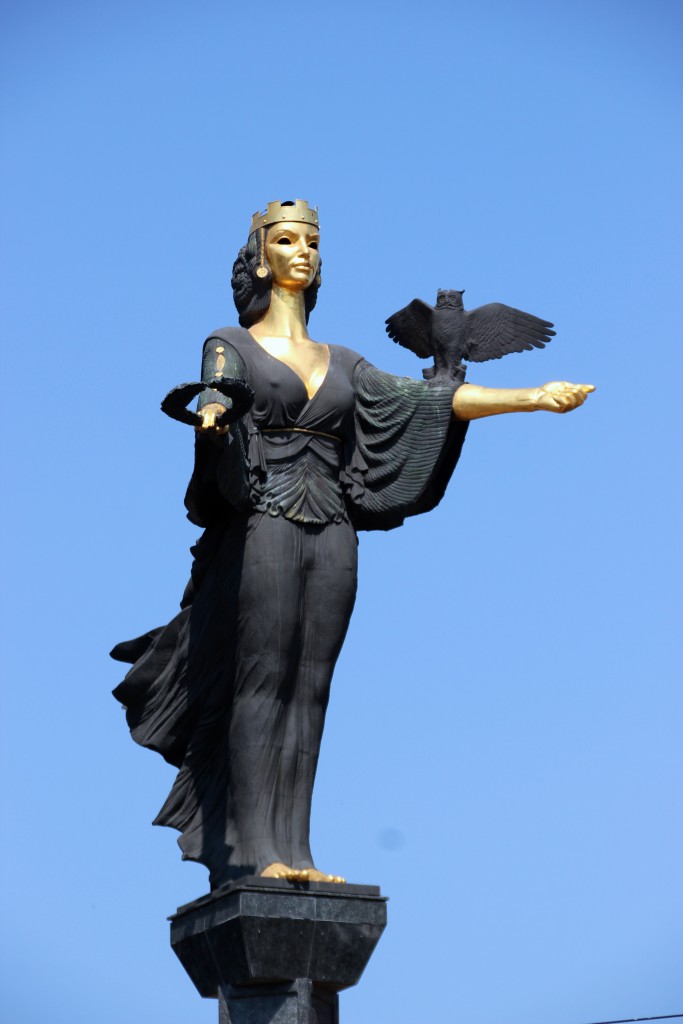 The Natural History museum on Tsar Osvoboditel has a comprehensive collection of stuffed animals, and a ten-minute cab ride to the imposing National History museum is worth it for the building alone. As with the rest of the city, there’s hardly anyone around. This is partly because there are fewer Bulgarians than Londoners (7 million), and partly because at this time of the year most Sofians have either left the city to work on the Black Sea coast for the summer, or have headed for the hills for their holidays. 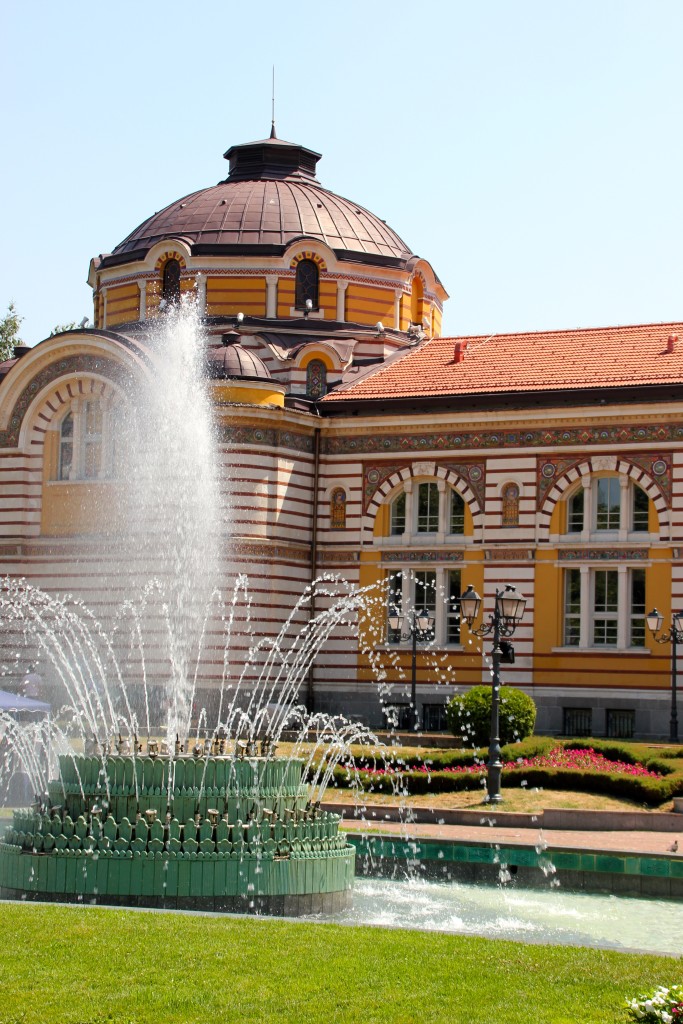 In the evening it’s time for some authentic Bulgarian cuisine. After a livener of White Stork and Shumensko Premium lager, we head to Pod Lipite on Elin Pelin, just off the Borisova Gradina Park that hosts the Vasil Levski national stadium. Here we tuck into a wide range of aubergine dips, fried onions, multi-shaped sausages and more, all washed down by White Stallion wine, all for under £20 a head. 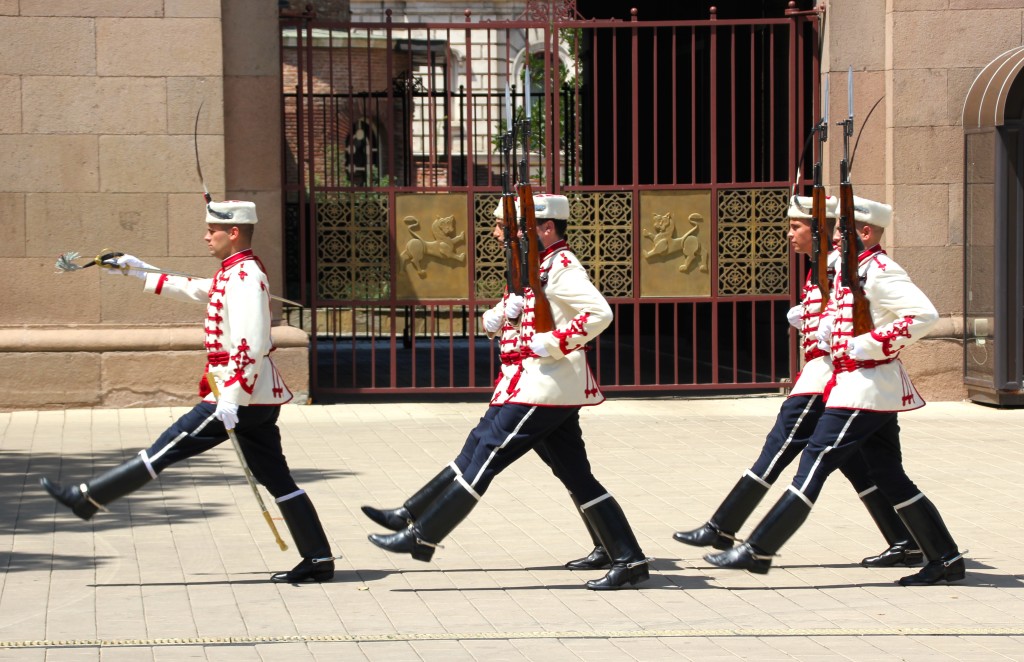 The next day we head for the hills. After a brief stop at the zoo, our driver Boris takes us up Mount Vitosha. The Stone River consists of huge boulders deposited by a glacier. Boyana church contains impressive ancient murals and frescos on the inside, and the guide narrates his entire spiel in Bulgarian without realizing that none of us could speak the language. The decommissioned TV tower at the top provides a distinctive ex-Soviet landmark, and the hotel next to it allows superb views of the city, so long as you pay 5 leva for the privilege. We round off at the Old Queen restaurant for moussaka, meatballs and Krombacher beer before heading home. The whole meal costs £15. 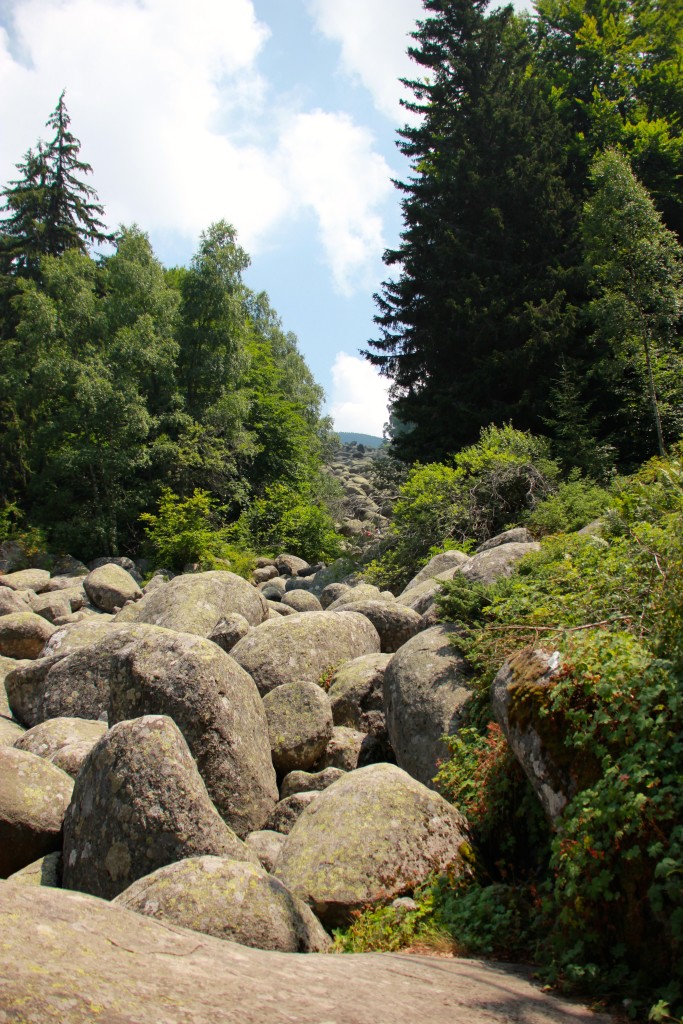 Bulgaria has completed a fascinating part of our Eastern European jigsaw. The Thracians never wrote anything down, but are regarded as the originators of European culture until the Romans arrived. The Bulgars invaded from Russia, and ever since have been squabbling with Ottomans, Serbs and Macedonians. The Cyrillic alphabet dominates, lending more of a challenge to navigation than many European countries. The post war communist era has paid a heavy toll, with 800,000 Bulgarians living in other countries, and a declining population. Things are cheap, but also tough. Tremendous potential in tourism, viticulture and food production remains largely unexploited. The people are durable and likeable. It’s a great place to go. 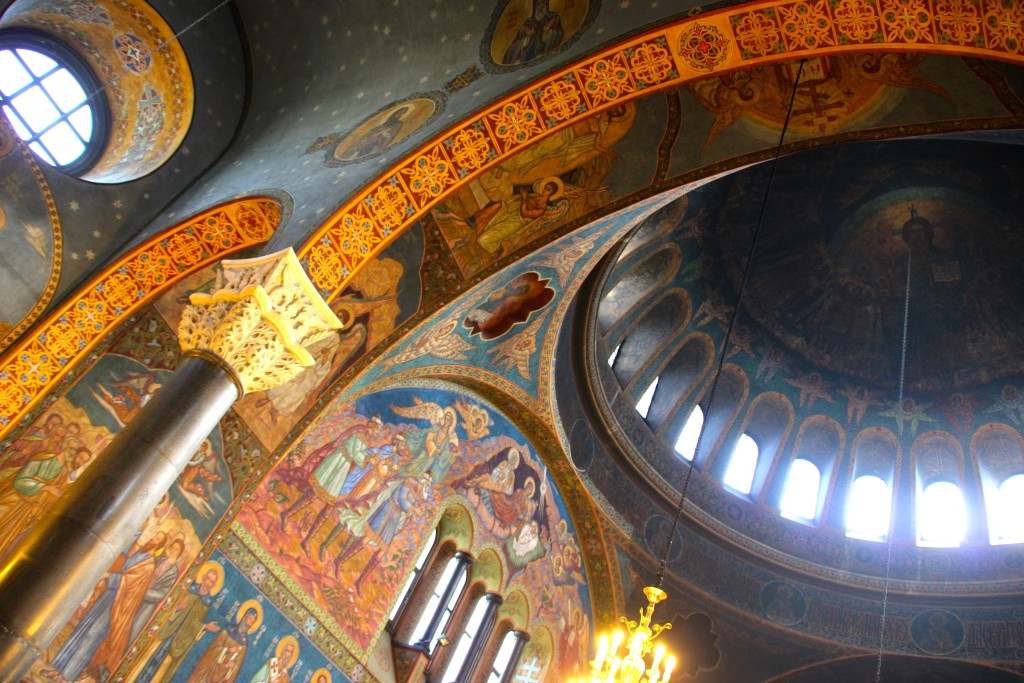