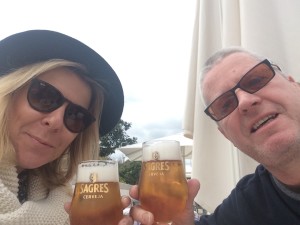 Sadly all Sarah’s photos were erased by a corrupted memory card, so all that remains visually of this trip is this selfie. Cheers and apologies all round!

It’s a two-and-a quarter-hour flight from Gatwick to Lisbon, but it felt somewhat longer as someone in front of us broke wind repeatedly throughout the flight, so the perfume I bought Sarah for Christmas came in handy straightaway. The airport is very close to the city centre – you can see the planes coming in all the time – and for a 15 Euro fare we are at our hotel. It’s the Real Palacio on Rua Tomas Ribeiro, near the Parque Eduardo VII.

The next day we get on the Metro at Picoas and head down to the River Tagus via Baixa Chiado. This is a pleasant pedestrian area that leads you through an arch down to the Cais das Colunas. The view across the river to the other shore is not quite as exciting as expected. It’s mainly industry and container tankers, with the Golden Gate-like Ponte 25 de Abril Bridge off to the right.

A Viva Viagem card lets you ride anything, so we jump on the tram (the ‘electrico’) out to what is billed as the pretty suburb of Belem (Bethlehem). The tram is not one of the old classics – it’s a modern affair. It’s packed and hot, and we chug through ugly industrial park and port infrastructure for around 30 minutes. Grabbing a Sagres beer and a fish lunch on Rua Vieira Portuense is pleasant enough. It’s a strip of what used to be brightly painted frontages, some ornately tiled. But it’s all seen better days, and badly needs a lick of paint.

The Mosteiro dos Jeronimos is a vast old monastery. Don’t bother to queue for the grounds – just head right to the enormous church, which is free anyway. Here you can pay your respects to the famous explorer Vasco da Gama, lying ceremoniously under a range of impressive arches and stained glass windows. Stroll through the various parks, enjoy the water features, but don’t expect much at the 100 foot + Padrao dos Descobrimentos – a somewhat knackered old tower reminiscent of Montreal’s dilapidated Olympic ski jump.

For 10 Euros you can grab a cab right across town and within 10 minutes we are back at the hotel for an excellent glass of Douro red wine (Terras de Grifo), and a barely-earned siesta. In the evening we fancy something local to the hotel, and take a recommendation to walk to Colina in Rua Filipe Folque. The lighting is retina-burningly bright and the food is adequate – roast pork and seafood with rice. It’s traditional to set tables with bread, butter and cheese (often in cling film), and often you are charged for this stuff whether you eat it or not.

The next day we stroll up to Jardim Gulbenkian, where the modern art museum is nothing special but the Museo Calouste Gulbenkian is excellent. The highlight is the Art Nouveau collection of glass and jewellery by Rene Lalique, with its mad dragonfly and snake designs. Then we head east on the Metro to Oriente, home of the Expo development from 1998 – the Park of Nations. The Oceanario here is Europe’s second largest aquarium, and is rammed with sharks, manta rays and barracuda, among other things. This is the best aquarium we have ever visited.

In the evening we head to Graca, a high-level restaurant overlooking the area of the same name. This is on Rua Damasceno Monteiro, and provides panoramic views of the river, the bridge on the right with its lit Christ the Redeemer statue on the opposite bank, and the old Bairro do Castello off to the left.

On the final day we take the trusty Metro to the jardim Zoologoca de Lisboa – or the zoo to you and me. It’s one of the best we have visited, with an excellent conservation programme and huge amounts of space for important species. The lions have a large and varied area to muck about in, and the chimps are having a great time in the sun, especially the youngsters. There is just time to nip back into the centre of town to Baixa Chiado. In the sun this would probably be more uplifting, but it lacks the character of many other European cities.

Overall, Lisbon does not have the zip or identity one usually finds in many European capitals. It’s all a bit tired. It mainly works, and prices are pleasantly low by London standards, but the best attractions we visited were, somewhat ironically, the zoo, the aquarium, and one art gallery. Architectural landmarks are pretty much absent, the river isn’t much to shout about, and everything is a bit tatty. Not unpleasant but any means, but a score of only 5 out of 10.