London is cold but Helsinki is colder. A few degrees above freezing versus a few below makes a big difference, but in recent weeks it has been minus 13. Early signs begin on
the flight over. After the cloud begins to clear on the two-and-a-half-hour flight, the snow covered coast of Denmark appears in the bright sunlight, and everything is white from now on around the Baltic Sea. We land in a snowstorm but it disrupts little here. The snowploughs are out every day and
mountains of the stuff line every road, but everything is working fine. Thirty minutes after landing we have arrived at the Hotel Arthur near the Central railway Station. It doesn’t sound glamorous, but it’s a perfectly good hotel – around 100 years old – with a reconditioned ‘art deco’ floor at the top. The lifts are unusual, with the doors appearing to be the all-steel type on a morgue or cold storage unit. We repair to the bar-cum-dining area for a well-earned Karhu ale, with its distinctive bear logo on it, and ignore the whooping from the works do that appears top feature an act wearing lederhosen. Helsinki doesn’t have scores of ‘must do’ landmarks, but there’s plenty to investigate
nevertheless. Immediately apparent is the cultural collision of Russia and the Nordics. This place has variously been run over the years by Swedes, Danes, Russians, Finns – all fighting over its strategic position on the Baltic. A quick glance at the map shows that St Petersburg is a short hop east, and Estonia just south. You could almost swim to Stockholm. Stepping out to the Central station reveals an art deco tour de force, apparently representing the transition from National Romanticism to a new Functional style, whatever
that means. We take the bus out to Korkeasaari zoo, about 20 minutes away on a secluded island where no cars are allowed. The river is frozen over and fishermen are using metre-long drills to bore through the ice. Cold climate big cats are particularly dramatic in this snowy setting. Amur tigers – the biggest in the world – sit calmly as the snow drifts down. An Amur leopard strides purposefully out at feeding time, grabs its lunch form a branch, and promptly returns inside. A lynx blesses us with a short tour of her pen, and a lone otter comes out for a roll in the snow. “Find the house of the elves and there are free pancakes,” said the local woman secretively as we came into the zoo. We did, and it was as shed full of children and what
appeared to be a closet barbeque. The snow leopard had produced three cubs in June, but quite rightly none came out today. Back in town we scoff a warming lunch at the Lasipalasti (literally “glass palace’, but it’s just a building with a fair number of windows). The food is excellent: salmon soup with generous chunks and potato, ultra tender reindeer steaks, and a fine selection of Finnish cheeses.

The days are short here and the sun doesn’t appear to come up much. It’s murky at 9 or 10am, people are having lunch by 11, and the sun is diminishing by 3pm. We seek out
the Sokos Torni – a 12-storey ‘skyscraper’ with a bar at the top accessed by a narrow iron spiral staircase. Being so flat, this gives a great view of the whole city by night, washed down with a pint of Lapin Kulta – golden Lapp beer. We then wander down the sweeping boulevard that is the near-unpronounceable Pohjoisesplanadi to enjoy the Christmas market spread out around the City Hall where the kids are tobogganing down the steps. We round the day off with a visit to the Belge – a glorified upstairs library – where we eat mussels and duck washed down by Bad Elf beer.

Blackout curtains and general quiet leads to a late start the next day. An early idea to
take the ferry to Tallinn is dropped when we see the icy conditions and the timetable. We opt instead for a rather more sedate ferry to the nearby island of Suomenlinna, a sea fortress founded in 1748. What must be a popular venue in the summer is almost deserted, with the restaurants and most of the cafes shut for the season. The onshore breeze is biting, but the hot chocolate is welcome. The historical information narrates, as everywhere in the world, a litany of nations beating the crap out of each other for a sustained period, with little or no discernible progress. An hour or two is enough, and after the 15-minute return trip we are back in the Market
Square. Pretty much everything is a short walk away. A little Christmas shopping followed by a high quality pizza at Raffaello on Aleksanterinkatu, and we have a completed a good day’s work, as ever, in about six hours of daylight.

On our final day we potter around a few other areas. The National Museum on Mannerheimintie is shut on Mondays, but we doff our hats to the stone bear at the entrance. He looks a little sad covered in snow. The Finlandia concert hall must be an
impressive sight in summer, overlooking the charming Toolonlahti lake. It’s completely frozen over, just like the river – the first time I have seen a permanently frozen body of water since my childhood in Norway. We grab a warming cappuccino in a café behind the impressively huge Parliament building. The temperature is down to minus 4 degrees and it’s not wise to be out for
extended periods. The food was so good at the Lasipalasti that we return and are lucky to get in – it’s rammed with Christmas lunch parties whooping it up, and all in full flow at 12.30. The return 30-minute run to the airport at 3.30 takes a little longer because it’s rush hour, but we are pre-checked in and only have hand luggage so all is well.

Impressions of the Finns on this visit are highly favourable. Everyone we met was charming – really helpful and frequently volunteering ideas and advice. Most speak
impeccable English. In snowy conditions that most Brits would bellyache about,
everything works, and everyone goes about their business. The cultural collision is fascinating, and should make most visitors want to investigate Sweden, Denmark, Russia and Estonia. The contrast in summer must be extraordinary too. Highly recommended. By way of contrast, compare the picture below with the one at the beginning. Flying in at 11.30 in the evening, I captured this fantastic sunset from 36,000 feet. It was a sunset of sorts, because daylight remained all night. A land of extremes, so choose carefully when you want to go: mmm, June or December? 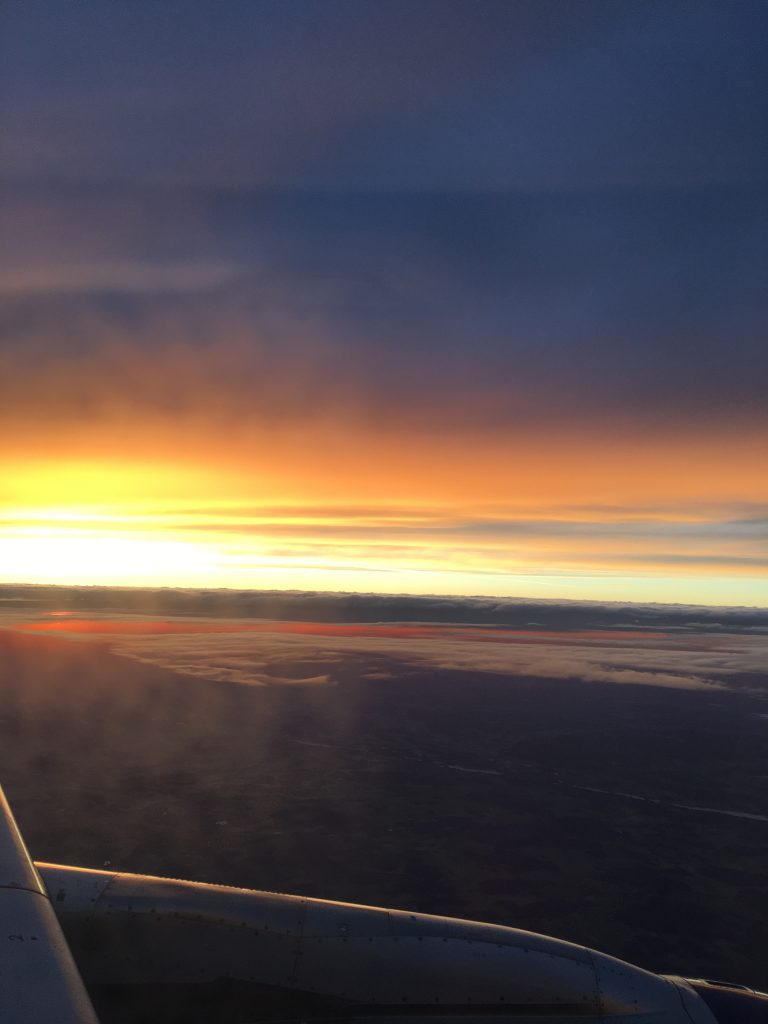